VIRTUALISATION giant VMware Inc is confident that its business will continue to grow this year and believes that the South-East Asia (SEA) region will be a key area contributing to this growth, according to a senior company executive.

The three priorities are: Focusing on the software-defined data centre (SDDC), the extension of its vCloud cloud computing products onto the public cloud infrastructure via partners, and the emphasis on its end-user computing business, he said.

“Firstly we continue to deliver on the SDDC, where we continue to virtualise all physical assets in the data centre, not just the servers but the networking and storage layers too, in order that they may attain high levels of automation so that we can deliver IT-as-a-service [to our customers].

“Next up is to extend that capability into a public cloud offering via our partners around the world, giving customers the ability run any app, anywhere without any change to their operating model and architecture.

“Finally, we will focus on the modernisation of the existing desktops, in what we call our end-user computing business, and focus on the virtualisation of desktops and mobiles,” he said.

The Palo Alto, California-based virtualisation and cloud computing software vendor continues to be a market leader in the x86 server virtualisation infrastructure space.

However, some industry watchers have argued that the company needs to diversify away from merely pushing its virtualisation agenda and branch into becoming a serious cloud computing provider itself.

For its part, VMware realised the need to diversify and began making inroads into the cloud space with its ambitious buy-over of software-defined and networking virtualisation startup Nicira for US$1.26 billion in July 2012.

In an article by InformationWeek last year, its editor-at-large Charles Babcock suggested that VMware has signalled its intention of becoming a public cloud player by moving into the infrastructure-as-a-service provider space with the introduction of its Hybrid Cloud Service.

This follows a recent analyst note by Trefis noting that VMware continues to face competition from other players such as Microsoft, Citrix Systems, Oracle and Red Hat.

Eschenbach, who was in Kuala Lumpur and in South-East Asia visiting VMware’s customers, said that the company remains committed to investing in the region, although he declined to provide investment details.

He said that South-East Asia represented the company's fastest growing region in the world for two consecutive years and that VMware will continue to invest in pre- and post-technical resources, as well as in sales capacity.

“It’s a growth region [and is a] heavy investment for us. In fact, South-East Asia is analogous to markets such as China and Japan just two to three years ago," he said.

Asked about Malaysia, Eschenbach said the company views the country with “great opportunities to grow [the] business,” and a place where there is “a strong set of partners who are willing to work with us.”

“We are sitting in one of the fastest growing countries in South-East Asia, and the entire region is performing quite well,” he added. 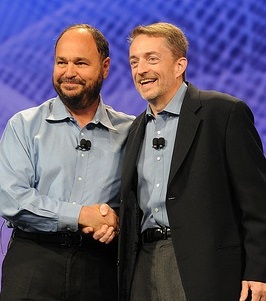 When asked how VMware – an independently operated subsidiary of EMC Corp – has been performing after Pat Gelsinger (pic, right) took over as chief executive officer from Paul Maritz (pic, left) in 2012, Eschenbach said the transition has been “seamless” and business has been growing since the handover.

“Pat [Gelsinger] is very strong operationally and he has come in to put a little more operational discipline into how we run the VMware business,” he explained. “He’s also very technical and as such, very active with our engineering organisation to make sure he drives a good amount of innovation too.”

Gelsinger took over the reigns from Maritz, who has since gone on to head another EMC subsidiary called Pivotal Labs, a software development firm.

Since coming on board, the 55-year-old former chief operating officer of EMC and a 30-year veteran with Intel Corp before that, has overseen three more acquisitions – Virsto, Desktone and AirWatch – in a bid to transform the VMware from being merely a virtualisation player to becoming a fully equipped cloud player.

The US$1.53-billion takeover of Airwatch, announced in January, was generally lauded by the press and industry analysts.

Forrester Research in a note said that this move to acquire the largest mobile device management (MDM) player to date represents a sharp pivot in VMware’s mobile strategy.

“To date, VMware’s mobile strategy has been centred on mobile virtualisation, focusing on dual-persona management as an alternative to MDM,” read the report entitled VMware acquires AirWatch to solidify its mobile strategy.

“This approach requires relationships with device manufacturers and carriers in order to get deeper integration with the OS (operating system) and middleware on the device, and this makes it more difficult to have a solution that works across all devices and OS versions,” Forrester said.

Forrester expects many enterprises to demand this functionality over the next several years. As such, vendors that lack the ability to bring together mobile and PC management, and enable productivity tools, will have a hard time competing in the long term.

“The approach would be similar to how VMware continues to run independently from EMC, but the acquisition would also allow AirWatch to look for models to accelerate its growth by leveraging the VMware footprint around the world with its large partner network,” he said.

He also said the AirWatch deal would help VMware reach the former’s customer base and it will now have the ability to manage, secure and bring any heterogeneous devices -- Android, iOS, Windows or BlackBerry -- into the network.

“This is natural extension of what we're doing,” he explained. “We're in desktops virtualisation and now we have ability to bring end-point devices on whatever operating systems into the enterprise,” he added.