EdgeBotix aims for a robot invasion in education ROBOTS and the classroom are not two concepts you might associate with each other. While Lego’s Mindstorms has done much to introduce robotics to children, the cost limits its use as an educational tool.

That’s where the ‘eBots’ from robotics startup EdgeBotix come in. They are affordable robots which can work with any programming language and integrate any sensor, claimed its founder and chief executive officer Abishek Gupta.

“The robots available for education are very expensive – for example, the Amigobot is about US$3,000,” Abishek told Digital News Asia (DNA) in Singapore.

“We wanted to breach that barrier, making [robotics] more accessible for education,” he added.

Students are fascinated by robots. Being able to program and control a robot with an everyday device like a smartphone would help drive interest, and allow learning via practical examples, he declared.

EdgeBotix is currently targeting engineering colleges, which brings about its own challenges.

“Bringing the concept of robotics in education to universities has been the greatest challenge so far,” Abhishek said.

“The conventional way of teaching is through a textbook, and people are reluctant to embrace a new interactive tool to learn.

“But once they start using it, they realise how it helps – it’s just a challenge of changing mindsets from book knowledge to applying it through an interactive tool,” he added.

READ ALSO: Nvidia puts a supercomputer in your pocket

The eBot contains an ARM Cortex M0 microprocessor, ultrasonic sensors, encoders, an inertia measurement unit for motion, and Bluetooth under the hood, according to Abhishek.

“We were able to integrate off-the-shelf sensors into the robot, giving users flexibility by allowing them to wire up the sensor to the chip directly,” he said.

This is unlike what its competitors are doing, which is to make only proprietary sensors, and also limiting the programming language that a user can use, he claimed.

“Other educational robots only support a single programming language, so if a student wants to learn C++ or Python, he or she would have to use other robots,” Abhishek said.

The eBot was launched in October 2014, and the prototyping process was a memorable one. “When we were making the initial prototype, we didn’t go home for three to four nights,” Abhishek said.

“It was continuous nights because we had a deadline for the demonstration,” he added.

The eBot was only ready after its third iteration. This final product was well received by the Singapore University of Technology and Design (SUTD), leading to EdgeBotix’s first order.

“When we demoed the product to [the people at] SUTD, they liked it and bought 50 units,” Abhishek said.

“These units are going through a testing phase with the students, and if all goes well, SUTD would be looking to buy more,” he added. 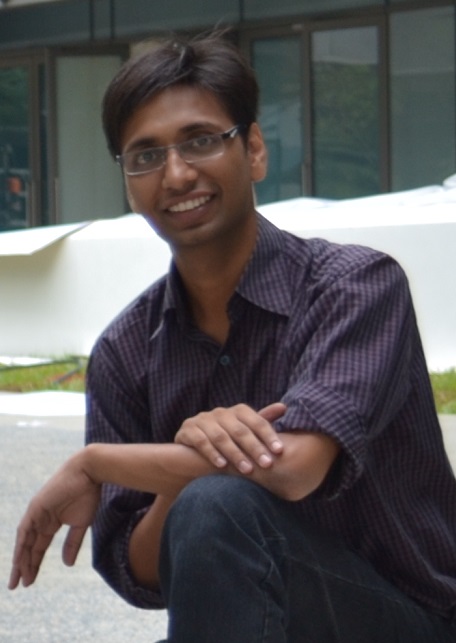 EdgeBotix is looking to launch a new product that will be more open to integration with even more sensors, according to Abhishek (pic).

“We will also make the design available to students, so they can come up with a new body if they want,” he said.

The new product will be cheaper and is targeted at high school students.

“We are also in talks with various companies to take on robotics projects for them,” he added, declining to disclose the names of these companies.

The startup is currently funded by its founders, as well as revenue generated from the sale of the 50 eBots to SUTD.

It is actively looking for seed funding as of now, and has been talking to some venture capital firms.

“We are nearing the closing stages of the fundraising, and if all goes well after our final presentation, we should get the money,” Abhishek said.

EdgeBotix is also looking to increase its headcount, with one person slated to join as a cofounder within the next two months, and two others to join as full-time employees.

Its current founding team consists of cofounder Harsh Bhatt, who is currently an undergraduate at the University of Waterloo, and two professors from SUTD, Erik Wilhelm and Feng Shao Hui, serving as advisors.