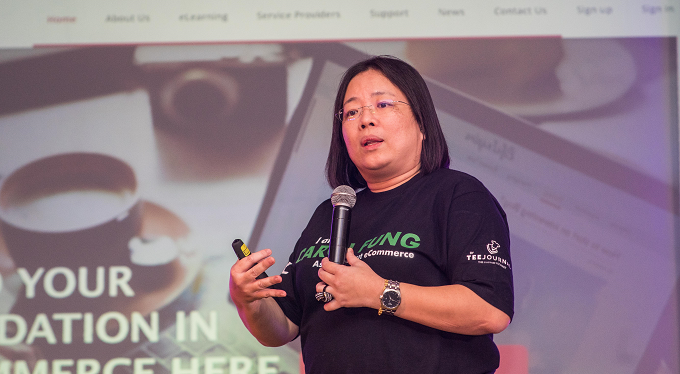 "IT TAKES a giant to shake you." These were the words of Carol Fung (pic, above), the Manager of eCommerce Adoption & Ecosystem Upliftment, eCommerce Enablement Division, MDEC, who recently spoke at the What's Next forum organised by Digital News Asia in Subang recently.

She was referring to the Alibaba group's close involvement with the recently launched Digital Free Trade Zone (DFTZ), an initiative that hopes to boost Malaysian SME growth, and in doing so, double its contribution to the Malaysian economy by 2020.

And big plans need big partners. "Even Amazon and e-Bay combined cannot beat the GNP of what Alibaba could achieve," pointed out Fung.

This strength and size has allowed the Alibaba Group to create a Malaysia Pavilion on Alibaba.com, freely available for Malaysian SMEs to promote and sell their products to a global audience.

This pavilion is in turn, part of a larger effort to develop an Electronic World Trade Platform (eWTP) to lower trade barriers and provide more equitable access to markets for SMEs around the world.

"The whole organisation in MDEC along with other agencies pulled through in getting 1,972 Malaysian SMEs and manufacturers, to participate in the DFTZ initiative," explained Fung, adding that this was all part of the National e-Commerce Strategic Roadmap, headed by Miti. The intent is that e-commerce will be the biggest contributor towards our GDP growth.

Fung was keen to highlight success stories, even though it's less than a fortnight since the launch of the DFTZ.

One example was a coconut seller who they helped to set up his e-commerce presence on Alibaba.com. WIthin a week, he had an order from Poland for two container-loads of fresh coconuts.

Each coconut is priced at US$2 to US$3 per fruit. "He's going to be a millionaire." Any hopes in the audience that this would be the ticket to instant riches was brought down to earth by the other presenter at the session, Bikesh Lakhmichand (pic, above), the founding partner of 1337 Ventures, who runs training programmes on how SMEs can make waves in the digital age with full confidence.

"No one says aim for disruptive straight away," said Lakhmichand. "Chances are you're going to fail."

His point is that developing the capability to be truly disruptive takes time.  "You are building the capabilities internally to learn how to do this slowly but surely," he explained.

For example, many companies are keen to be able to react quickly to the ever-changing environment. But instead of just casting it as better processes, Lakhmichand also points out the need to internalise the concept.

"The whole concept of lean and agile, is mainly having the right mindset within your organisations."

Similarly, he posits that companies sometimes look at the wrong thing when improving their products. "Sometimes it's not about the tech, it's about the softer approach itself."

"We actually map out the thoughts and emotions as they use the product," he says, citing a major telecommunication company's willingness to go out to the five-foot way in front of their offices to get immediate feedback on their designs.

"When a customer is delighted with their experience, they're going to tell more people."

He also says this development work can happen fast, going from idea to prototype in only five days.

Training to fill the talent gap

Of course, all this theory needs somebody to carry it out.

"The biggest complaints of Malaysian companies to MDEC is the talent situation," said Lakhmichand. In the short term, these skills will need to be imparted through training.

But Lakhmichand explains that even his company had to be disrupted by the needs of the modern workplace.

His courses normally run for a week, but most employers cannot spare their staff for that length of time. So Lakhmichand changed the nature of his course.

"What we've been rolling out in our organisation is mobile learning," he explained. "The first four days of content will be done in a mobile form. The participants can view the content and learn in their own free time."

This idea to impart skills as quickly and efficiently as possible was also reflected in Fung's talk. "We are building bite-sized content for all companies here to have that mindset of how to start your business digitally," she said.

The training is just one part of MDEC's efforts to educate SMEs on the whys and hows of e-commerce, all delivered through their website Go-ecommerce (http://www.go-ecommerce.my/).

"We built this because we want to provide a one-stop e-commerce solution for you to come in and learn for free," said Fung. "We also put in grants as well as loans available from the private sector and government agencies."

As participants progress through the lessons, they "unlock" rewards such as free name-card printing, the use of a photo studio to take product photos, and even some free shipping for those new to navigating cross-border consignments.