COMMERCIAL real estate experts, Zerin Properties Sdn Bhd, in early November, shared its research findings that the uptake for flexible working environments and co-working spaces in Kuala Lumpur will accelerate within the next 5 years. “My research team found that the take up of flexible office spaces is less than 5% of total office stock, in developed cities, but this could grow to be around 25% within the next decade or so,” said Previndran Singhe, CEO of Zerin.

Previndran didn't have to wait long for validation as today the city of KL takes a big step towards that 25% prediction with the news that the largest shared work space operator in the world, WeWork, has just announced the opening of a 100,000 sq ft space in the heart of KL.

“I am very positive about the future of flexible working environments and co-working spaces in KL,” he says. “Lots of companies want to be agile and operators such as WeWork and Common Ground understand this,” he says.

Estimating there to be 34 co-working operators in Malaysia versus the 100 in Hong Kong, Previndran estimates a growth of between 16% / 17% a year in the local market.

“They are here to stay and will change the way how office space will be used.”

Interestingly, WeWork has adopted a business model it pioneered in 2016 when entering India, for its market entry into Malaysia. Instead of directly taking up a large lease with a landlord or developer and tying up capital, it has partnered with Douglas Cheng who has taken up the 100,000 sq ft lease at Equatorial Plaza, Jalan Sultan Ismail, at his own expense and will furthermore pay WeWork a franchise fee believed to be in the 30% range.

A lawyer by training, Cheng made his name in the F&B space in KL and is also part owner of TREC, branded as the largest and premier lifestyle & entertainment hub in Malaysia. What’s also interesting about WeWork’s Malaysia play is that Ashman Najib, a son of former prime minister, Najib Razak was initially involved. Ashman posted a pix on his Instagram account in late 2017 as being excited about the co-working space and of WeWork. He has also been seen to accompany Cheng and WeWork executives when they were searching for a suitable location to launch in KL. WeWork has clarified that Ashman did not have any involvement in WeWork at any point.

According to Cheng, Ashman had no involvement in the financial or business dealings of WeWork in Malaysia. Cheng stated that Ashman was a friend of one of the WeWork executives and one of several Malaysian guests invited to the opening of WeWork in SIngapore last year.

What is clear however is that the local co-working market will see more competition, especially if WeWork decides to get aggressive on pricing and undercut the market.

And having raised a recent November 2018 round of US$3 billion (RM12.48 billion) from its largest investor, Softbank, it does have the firepower to compete on price.

Yet, according to Erman Akinci, co-founder of Common Ground, one of the leading co-working spaces in the country, even if WeWork is aggressive on pricing, the reality is that the co-working culture is very hyper localised with people very particular about how far away they are willing to travel for work . “In fact, we have data to show that the sphere of influence of our locations drops dramatically after 2km to 3km.” What that means is that if their location is more than 3km away from someone’s home, they will likely not consider it as a location for them to work.

If this stands true, only the co-working spaces around the current WeWork location in KL will feel the heat from its market presence. And Common Ground will throw its hat into the ring as well with Erman hinting that it will soon have locations in the city centre as well.

What that means though is that companies that are seeking flexible work spaces, be they for special projects or for startups or SMEs, will find a variety of spaces and price points that should strike a chord with them.

As is the case with hyper growing startups that capture the imagination of investors, profits are not an immediate concern for WeWork that recently announced it lost US$1.22 billion through the first nine months of this year after losing US$933 million in 2017. It also said it generated US$1.25 billion in revenue for the first nine months of 2018 and was on a pace to exceed US$2 billion in sales by year-end.

WeWork is currently valued at around US$42 billion. 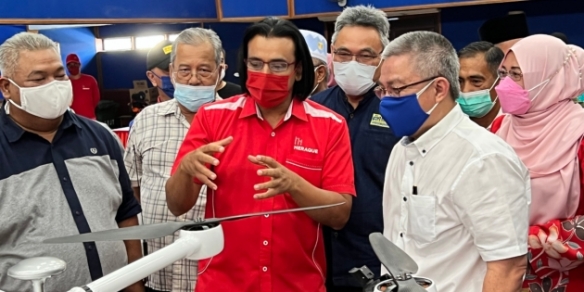