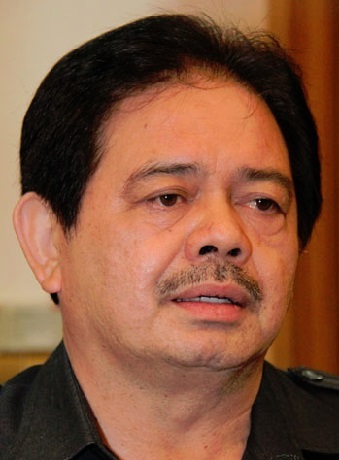 (Updated with comments from Pikom)
FORMER Minister of Science, Technology and Innovation Dr Jamaluddin Jarjis liked to point out to journalists that his ministry was one of the toughest to manage. “Our responsibility covers the stars to the bottom of the ocean, and everything in between,” he liked to say.

Indeed it was a comment that Maximus Ongkili, science minister from 2008 to April 2013, has repeated too.

And now, the responsibility of managing 17 agencies with interests as diverse as biotech, nanotech, ICT, space science, oceanography, cyber security and R&D, will fall on the shoulders of the latest minister, Dr Ewon Ebin (pic).

If you find yourself asking “Ewon who?,” chances are you are not alone. Even the National ICT Association (Pikom) was stumped and has decided to hold back on an official response until it has more information on the new minister -- who incidentally, will be officially handed his duties at a ceremony this morning (May 20) to be streamed live through the MOSTI portal.

There is a sketchy profile of him on the Malay-language edition of Wikipedia, complete with his political record of standing for elections in Sabah. According to that page, he has a PhD which he earned in 1978 from the University of Malaya with his thesis on, ‘A Study of Customary Law in Sabah Dusun Ranau on Marriage, Divorce and Inheritance.’ National news agency Bernama says he is a law graduate.

Not too comforting for those in the industry yearning for a dynamic minister who understands the importance of technology as an enabler for much of what happens in many other industries.

Indeed, the Multimedia Development Corporation (MDeC) – the national ICT custodian – likes to point out that ICT (Information and Communications Technology) spans 80 or so of the 124 Entry Point Projects of the Economic Transformation Programme (ETP).

Nonetheless, with ministers in Malaysia chosen very much with political considerations over practical reasons, the industry will soldier on and hope for the best with the new science minister -- as it will with the not-so-new Minister of Communications and Multimedia, Shabery Cheek, who switched portfolios from the Ministry of Youth and Sports.

The Technopreneurs Association of Malaysia (TeAM), for one, welcomes their appointments and seems to hope that Ewon and Shabery can help promote a stronger push to encourage the Government at least to buy more local technology services and products. "We feel that these are two key Cabinet posts that have significant impact on the technopreneur ecosystem and it is thus refreshing to have two new ministers who will bring fresh ideas and hopefully challenge the status quo to create a stronger ecosystem for technopreneurs in Malaysia," says Dr V. Sivapalan, director of the TeAM Policy Institute.

Sivapalan points out that in the current challenging environment, where competition is global but opportunities abound for Malaysian companies, all stakeholders must work together to ensure Malaysia stays relevant and strong in the region while seeking to stamp its mark on a global scale.

“TeAM is confident that Malaysian companies have the talent and passion to succeed globally, provided they are given equal opportunity to do well in Malaysia itself. A strong position in their home country will give technopreneurs a solid footing to expand overseas.”

Cautiously optimistic that Ewon and Shabery will make a difference, Sivapalan says that TeAM looks forward to working with them and their officials “in formulating policies that will take the science, technology and multimedia sectors forward.”

Ashran Ghazi, president for the Malaysian Association of Bumiputera ICT Entrepreneurs and Industry (NEF), is also hopeful for better things to come in sending his congratulations to the new science and communications ministers. However, Ashran also shares the association's hope that the ICT portfolio that currently resides under the science ministry will be passed over to the renamed Ministry of Communications and Multimedia.

"I believe and hope that this was done intentionally and it is not just a matter of name refinement. I am sure most will agree that it seems more apt and better synergies can be achieved. After all, content, applications, cloud services, films, etc. are all part of the convergence world and putting all of these under one roof will enable better efficiencies in terms of programmes without wastage and overlaps," says Ashran.

This convergence has long been lobbied for by the National ICT Association (Pikom) and it is naturally pleased at the propect of this coming true. According to its chairman, Woon Tai Hai, "Pikom views positively the restructuring of the Communications and Multimedia Ministry. We continue to look forward to a single ministry that will place IT and Communications under a single ministry as there was significant overlap between the Ministry of Science, Technology and Innovation and the Ministry of Information, Communications and Culture in the previous Cabinet."

Pikom looks forward to building a closer rapport and collaboration with Ewon and Shabery while extending its thanks to Maximus and his deputy Datuk Fadillah  Yusof for a job well done during their tenure as minister and deputy minister.