THE increasing consumption of video content on tablets, smartphones and other devices will push the wired broadband networks that carry this traffic to their absolute limits over the next decade, Bell Labs said, citing new research in the United States.

Bell Labs, the research arm of Alcatel-Lucent, said its projections suggest that by 2020, consumers in the United States alone will access seven hours of video each day – as opposed to 4.8 hours today, and will increasingly consume this additional video on tablets, both at home and on the go.

The research (click chart below to enlarge) also points to a dramatic shift in viewing habits, as consumers switch from broadcast content to video-on-demand services, which will grow to 70% of daily consumption compared with 33% today, Bell Labs said in a statement. 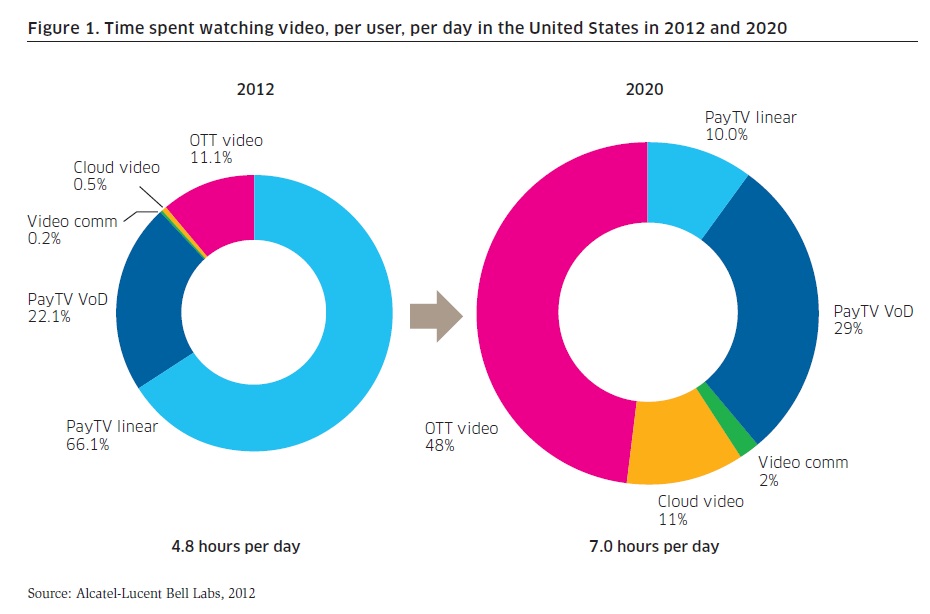 The study also highlighted how these trends will stretch the capabilities the residential broadband networks many service providers use today. As the delivery of video content rapidly moves from traditional broadcast TV to the ‘unicast’ delivery of personalized content to individuals, disproportionate pressure will be placed on the IP edge of these networks.

The IP (Internet Protocol) edge is the part of the network where most of the intelligence is needed to deliver sophisticated video and high-speed Internet services is located, Bell Labs said.

Broadcast is a much more efficient way of delivering video services, so the move to unicast creates enormous bandwidth demands on networks.

Marcus Weldon, chief technology officer of Alcatel-Lucent, said: “Delivery of video from the cloud and from content delivery networks to tablets, TVs and smartphones -- with guaranteed quality – presents an exciting new revenue opportunity for communications service providers, but only if they are prepared to take advantage of it.

“Left unmanaged, the rapid growth in video traffic can turn into a deluge and spell disaster. It is important to look at where service providers’ investments can have the most impact, and this research makes clear that the IP edge of both wireline and wireless networks – which are increasingly becoming one and the same – offers the greatest opportunity to improve network performance.

“At the same time, it also presents the greatest source of risk if not managed appropriately,” Weldon said.

Bell Labs found that on-demand video services, such as high definition premium movie services as well as video sharing sites, will become even more popular over the next five years. As a result, on-demand video will command an increased share of viewing hours, causing peak-hour traffic at the edge of new IP-based networks to grow 2.5 times faster than the amount of traffic on the broadband connections reaching households.

This challenge will need to be addressed, comprehensively, if communications service providers are to maintain their ability to deliver high-quality residential multimedia services to consumers.