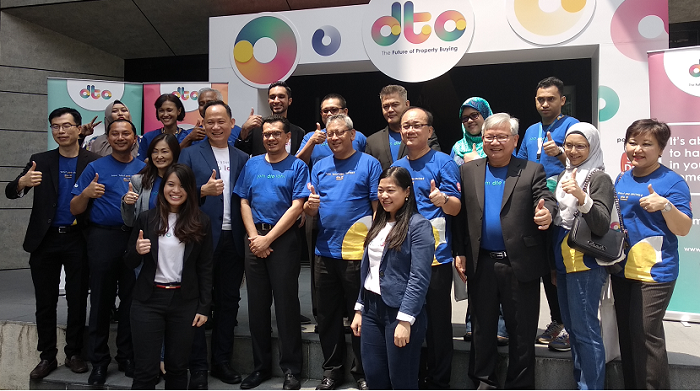 Typically, the relationship between property developers and customers is simple: they build, you buy. Customers don’t often have input in what they want for their property, and developers do their due diligence to make sure they create houses that please everyone.

Sime Darby calls this a “silent wall” between property developers and homebuyers, and they intend to break it.

dto (pronounced “ditto”) would be that figurative sledgehammer. Launched recently, the online platform essentially allows customers and would-be homebuyers to vote on the concept, design and amenities of the property.

dto co-founder Tee Ee Lynn likens it to “allowing customers into the property developer meeting rooms”. Basically, you get to have your say in what you want in an upcoming development. Maybe grey would look better as the overall aesthetics. Perhaps a fountain would be a really bad idea. Once the votes are tallied in, the new building will be built accordingly.

“dto emphasises guiding potential customers in their journey towards owning a property, by giving them a say in the properties that Sime Darby Property is building today,” Sime Darby chief operating officer Wan Hashimi Albakri summarises.

“The idea is to change the future of the property landscape through an engaging, empowering, educational and collaborative online platform that connects the developer and potential homebuyers.”

The co-creation process is done publicly – Wan Hashimi notes that the only requirement to cast your dto vote is that you are aged 21 and above. All you need to do is sign up on the dto website.

The dto experience is segmented into three phases. Phase 1 involves deciding on the external building’s aesthetics and inclusions, while Phase 2 gathers votes on the common facilities of the development such as the playground design, the type of gym equipment and the need of a co-working space.

Phase 3 revolves around the internal unit, where customers vote on the tiles, timber flooring, iron monger and sanitary fittings.

It’s not an entirely online experience – a Material Display Exhibition and Experience lets customers test out and feel for the type of installations they want. This happened during the Official Primetime8 Launch Party on April 20, in the SJCC Sales Gallery at Subang Jaya.

There are also bite-sized educational material available on the platform to help customers understand what they’re getting for the decisions they’re voting for, filmed with architects, interior designers and experts.

Sime Darby Property chief marketing and sales officer Gerard Yuen Yun is quick to point out that dto is a co-creation platform, and not about customisation. While customers get to vote for their preferred sink type, for example, it doesn’t necessarily mean that the sink will be installed. The sink with the majority of votes will be the reigning feature of the development.

Yuen, however, adds that they are not averse to adding a customisation feature down the pipeline.

It’s worth noting that dto mimics the actual building development cycle, meaning that votes are collected first before construction begins. If you opt into the project once it’s fully completed, you won’t be able to cast your vote on dto.

Being active on the dto platform has its perks. By interacting and voting more, customers get to be an “Engaged Customer”, which ultimately gives them priority in purchasing a unit of the development during launch.

dto will be a feature on two residential high-rise projects under Sime Darby. The first one, with a target launch sale on August 2019, is a freehold Subang Jaya property “within walking distance” of Empire Shopping Gallery.

Project 2 would be a freehold apartment in Putra Height, with a target launch sale on early 2020. The third project is a landed development that is “coming soon.”

The idea behind dto is a winning PNB Group Innovation Challenge Idea in 2017, where Sime Darby Property (alongside S P Setia) won sixth place. Companies whose team members won the competition would need to set aside a dedicated seed funding for the teams to execute the winning idea. dto received a seed funding of US$725,000 (RM3 million), with execution starting in May 2018.

The platform was officially launched on 15 January 2019, with its first appearance during the iProp Fair in Mid Valley earlier this year. dto to date has up to 3,000 users.

Will it truly disrupt the property buying industry? It’s hard to say. But homebuyers being more connected to property developers, and having an actual say in a project, is an interesting proposition nonetheless.