CYBERSECURITY companies are using alerts over the recent resurgence of ‘Madi,’ a trojan used in targeted campaigns and observed in the wild since last December.

Targets of the Madi campaign appear to be all over the spectrum but include oil companies, US-based think-tanks, a foreign consulate, as well as various governmental agencies, including some in the energy sector, Symantec Security Response reported.

Although Madi has been seen targeting various Middle Eastern countries, it has also been found across the globe from the United States to New Zealand, Symantec said (see pie chart, courtesy of Symantec; click to enlarge). 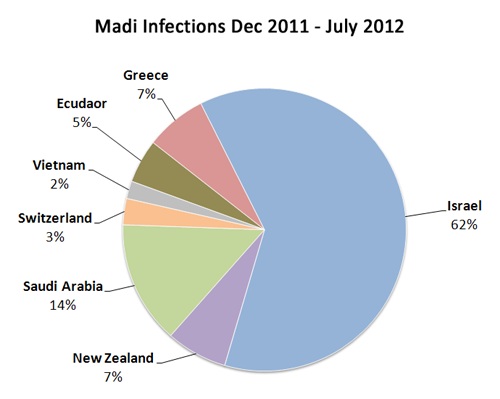 The Madi attack relies on social engineering techniques to get onto targeted computers. Targets like Iran, Israel, and Saudi Arabia might suggest involvement of a nation-state, however our research has not found evidence that this is the case, it added.

In addition, examination of the malware identified an unusual amount of religious and political ‘distraction’ documents and images that were dropped when the initial infection occurred.

“While the malware and infrastructure is very basic compared to other similar projects, the Madi attackers have been able to conduct a sustained surveillance operation against high-profile victims,” said Nicolas Brulez, senior malware researcher at Kaspersky Lab. “Perhaps the amateurish and rudimentary approach helped the operation fly under the radar and evade detection.”

“Interestingly, our joint analysis uncovered a lot of Persian strings littered throughout the malware and the C&C tools, which is unusual to see in malicious code. The attackers were no doubt fluent in this language,” said Aviv Raff, chief technology officer at Seculert.

Kaspersky Lab’s Anti-Virus system detects the Madi malware variants along with its associated droppers and modules, classified as Trojan.Win32.Madi.

Additional details can be found at a Symantec Security Response blog here. To read the full research post by Kaspersky Lab’s experts, go to Securelist. To read Seculert’s research about the Madi campaign, check out the Seculert Blog.