THE Malaysian Communications and Multimedia Commission (MCMC) has cast doubt on online data published by Ookla, a company that specialises in broadband testing and network diagnostics, which put Malaysia’s broadband speeds as lagging behind its Asean neighbours such as Cambodia and Vietnam.

In a statement, MCMC said it “echoed” Communications and Multimedia Minister Ahmad Shabery Cheek’s scepticism about the Ookla results.

According to business weekly The Edge’s online edition, the minister had said that while he knew Malaysia’s broadband speeds was not something to be proud of, he also said that one must look at the benchmarking Ookla used.

A number of broadband speed tests have been conducted and publicised by various parties reflecting varying results, MCMC said. Each is measured using a different methodology, which results in differing outcomes, it added.

“Indeed, you will get varying results as there are various reports besides Ookla, like Akamai and ITU (the International Telecommunications Union),” said MCMC chairman Mohamed Sharil Tarmizi.

“In fact, if you see Ookla’s own test results (see Fig.1 below), the average broadband speed in Kuala Lumpur is 6.92Mbps and even Pantai shows an average speed of as high as 21.84Mbps. It all depends on where the tests are coming from and how many cities were [evaluated].

“We have a robust and vibrant ISP (Internet service provider) market; some may offer higher speeds than others. Consequently, when a speed test is done, the results are averaged out,” he added. 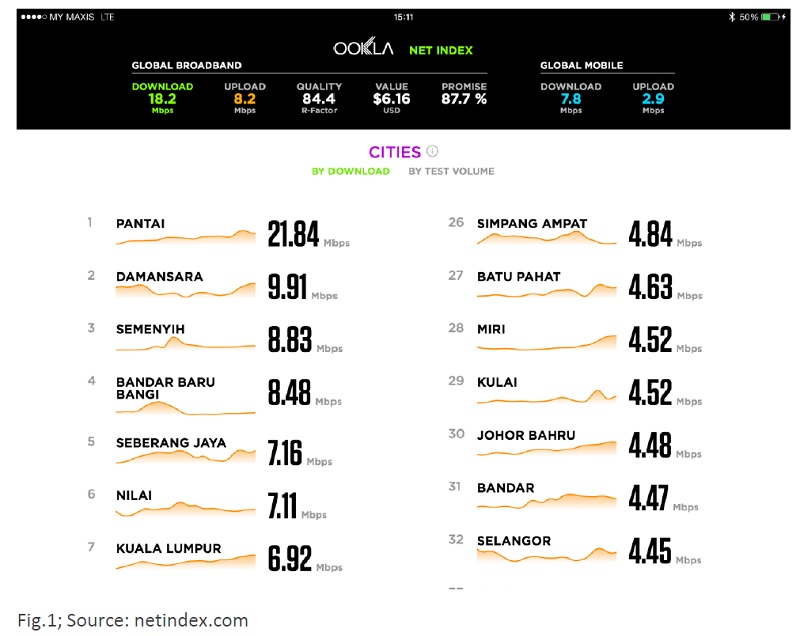 MCMC said it has “long recognised the need to upgrade broadband speeds and quality,” and has since 2010 pushed for broadband expansion through the implementation of the High Speed Broadband (HSBB) project under the National Broadband Initiative (NBI).

It said that it has also issued new spectrum on LTE (Long-Term Evolution) on 2.6 GHz and allowed existing operators to upgrade their networks in the 1800 MHz band to LTE.


“These networks will take time to build. HSBB phase 1 was completed in over 100 industrials areas, towns and cities, and HSBB phase 2 has recently been finalised,” said Sharil (pic).

“In fact, we have already issued the tender for 400 telecommunications towers for rural areas in Malaysia. Our broadband rollout plan focuses on the whole nation and not just cities like other countries, so that each citizen will be able to enjoy the connectivity,” he claimed.

In his Budget 2014 speech last October, Prime Minister Najib Razak announced the implementation of the second phase High Speed Broadband project (HSBB 2) together with broadband to rural areas to be carried out in a public-private partnership to the tune of RM5.75 billion over the next three years.

“[This is] being done through various initiatives – for example, by expanding the coverage of fibre-based technology; building 1,000 telecommunication transmission towers for wireless solutions in rural areas; connecting fibre-optic backhauls to base stations; and building new submarine cable systems between [East and West Malaysia].

“Admittedly, we recognise that much more needs to be done. We continually engage the industry in talks to further improve broadband quality and speeds as well as expand coverage.

“Our own historical data indicates that there has been explosive growth of broadband consumption and it is possible the industry has under-estimated the demand that needs to be fulfilled. For example, 3G subscription since 2006 has grown 42 times,” said Sharil (see Fig.2 below). MCMC also said that Ookla’s methodology is based on a user-generated content platform. It compiles data of people in different locations who use the Ookla server to test Internet speeds. Only tests results taken within 300 miles of the server are included in the index, and the lowest and highest speeds are divided over the number of test points.

“The results will differ depending on the broadband packages, population, and country. Furthermore, the results do not distinguish between the different times of day when the tests are carried out when there may be users connecting at Gigabit speeds as well as users connecting at dial-up, satellite or DSL speeds.

“The more widespread the broadband coverage, the more the results will reflect a lower average download speed unless all the areas covered have very high bandwidth concentration,” MCMC said.

This is in contrast to benchmarking done by Akamai, which last year reported that Malaysia had posted impressive broadband growth.

“Akamai believes that the average peak connection speed is more representative of Internet connection capacity. By using the fastest measurement observed from each unique IP address, those connections that reached maximum throughput rates are reflected.

“Often, though not always, these connections are associated with the download of larger files, such as desktop applications, games, or software updates,” MCMC said in its statement.

The Commission also noted that according to The Affordability Report 2013 issued by the Alliance for Affordable Internet (A4AI), Malaysia has the most affordable broadband amongst the 46 emerging economies it measured.