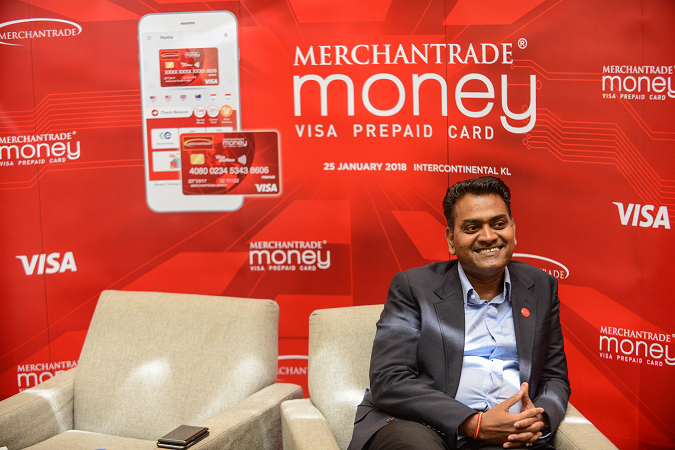 FINTECH companies, with their promise of disruption and conquer-all spirit may be hogging the limelight as potential disruptors of the lucrative world of banking but in Malaysia, the most tangible challenger to the business of banking may well be from low key Merchantrade Asia Sdn Bhd, Malaysia’s largest Money Services Provider. It is the largest licensed remittance player and among the largest money exchange players.

It doesn’t have the swagger or cocky confidence of the average fintech startup, but the company founded by Ramasamy Veeran back in 1996, that began life as a telco equipment vendor before moving on to selling pre-paid calling cards targeting migrant workers, sure knows money. To the tune of US$3.8 billion (RM14.8 billion) last year, which was the sum total of money that flowed through its channels with RM3.1 billion in retail money changing, RM6.6 billion in wholesale currency and close to RM5.1 billion in money transfer. Wholesale currency means they are licensed to import currency notes into Malaysia to supply to the money changers.

That money flowing through the Merchantrade ecosystem, which includes an MVNO (Mobile Virtual Network Operator), gives Ramasamy priceless insight into the behavior of his almost 1 million customers.

And the signal he is getting is telling him that change and the rapid pace of it, is going to disrupt the status quo. Specifically, this change is coming in the form of customers moving to the digital version of the offline services they currently use. “We can see the adoption,” he says.

For example, its eForex service closed 2017 with RM30 million transacted online. Its online remittance service meanwhile, eRemit, saw RM750 million transferred by users in 2017 with Ramasamy projecting this to hit RM1 billion this year. This service is not just used by migrant workers as it is commonly perceived but also increasingly by Malaysians sending money overseas to children and loved ones and by expatriates as well.

Even migrants are changing in their behavior and it’s driven by smartphones. “You used to see migrant workers at the airport with huge luggage packed with gifts they are taking home for their loved ones, including TV sets. But today they are increasingly buying these online through merchants in their country. The trend is already there. They just need a payment platform,” he says.

Disrupt self first…then the banks

Interestingly, Ramasamy recognizes that he is part of the status quo which is why he tells DNA, “We have to disrupt ourselves first before others do.” And he has been doing that without any fanfare since 2011 when he launched eRemit for individuals.

Ambitiously, as he is disrupting his own business, he also has his eyes set on bigger fish. “I want to disrupt banks.” But rather than look at himself as a future digital bank, he prefers the description, “digital non-bank”.

Yet, to disrupt a bank and its market, one must know the strengths and weaknesses of a bank which is why Ramasamy has been hiring a lot of bankers over the past few years and setting up his own treasury unit. “I see this as a great opportunity and we are going after it.”

But the fundamentals are still the same with Merchantrade needing to acquire more customers, strengthen its ecosystem and build a brand and the trust that comes with that.

And he took a big step towards his twin goal of disrupting his own physical business and banks with the launch yesterday of Merchantrade Money, a hybrid payment service that comes in the form of a physical prepaid multi-currency card that can be used at ATMs globally and an app that allows one to transact digitally.

“We see that this product will fit in very well with our customer’s behavior and lifestyle and it will even accelerate their transition to a digital first lifestyle,” predicts Ramasamy.

Merchantrade Money is targeted at migrant workers and Malaysian travelers, be it for work or pleasure. Users can convert their pre-loaded Ringgit into multiple currencies, starting with the Australian, Singapore and US dollars, Sterling Pound and Indonesian Rupiah. With Bank Negara approval to offer 20 currencies, the remainder will be gradually rolled out by the end of the year. The current maximum load amount is RM10,000 with plans to increase this but pending regulatory approval.

Users monitor exchange rates through the app and then buy a currency instantly without going to a money changer. Which is why Ramasamy calls this, “your personal money changer in your pocket”. It can be used wherever the user is, even if overseas, and whenever they want to.

Convenience aside, Mechantrade is confident that it offers the best rates in the market, a claim made by both Ramasamy and Vince Au Yoong, chief payments officer, Merchantrade.

But forex exchange is just one of four features of Merchantrade Money which is why Ramasamy describes it as “a dream project”.

The other features are remittance, eCommerce and budget management.

Describing Merchantrade Money as a big step towards the Digital Economy in Malaysia Ramasamy is already seeing early signs of consumer acceptance. The product that took 18 months to build internally, managed to acquire 10,000 customers in its two month pre-launch with RM10 million in reloads, leading Ramasamy to predict hitting 180,000 users with RM300 million in total reloads by end 2018. The target over three years is an ambitious 1 million users.

Acknowledging the aggressive target and aware of the rash of digital payment services introduced recently, including from Chinese players, Ramasamy is nonetheless confident that the ecosystem and existing customer base of Merchantrade gives them a strong base to grow from. “It is not easy to launch a payment product and ask people to give you money upfront.”

This is where the ecosystem of Merchantrade gives it a clear edge with 84 retail money branches, more than 400 agents across Malaysia and strategic partnerships with international wire transfer operators, foreign banks and payment centers, combine to offer its customers 234,000 pay-out points in 200 countries.

Augmenting this reach is the co-branding of Merchantrade Money with payments provider Visa, thus opening access to Visa enabled ATMs globally and around 44 million merchants as well.

Part of MDEC’s (Malaysian Digital Economy Corporation) Global Acceleration Innovation Network (GAIN), Ramasamy, who claims that no such product exists in the market, intends to stay at the cutting edge of innovation with more such products in the future.

Commenting on its innovative product and partnership with global payment technology leader, Visa, MDEC vice president (Enterprise Development) Gopi Ganesalingam says: “With this collaboration with Visa, Merchantrade is establishing itself as a digital company that is bringing its business beyond the shores of Malaysia.”

For Ramasamy the local market offers huge potential for now. “With retail money changing industry turnover of RM80 billion still transacted mainly in cash, Merchantrade is taking the lead in revolutionising this industry via digital money.”