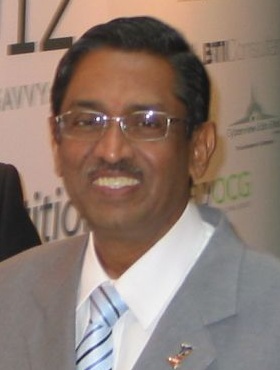 THE data center industry in Malaysia is on track to hit RM400 million (US$133 million) or higher in revenue in 2012, after recording revenues of RM320 million (US$106 million) in 2011, said Datuk Seri Dr S. Subramaniam (pic), Minister of Human Resources.

“We’re targeting revenues of RM480 million (US$160 million) for 2013,” he told a press conference on Jan 16 after delivering a keynote address on the first day of the two-day Datacentres Malaysia Summit in Kuala Lumpur.

He noted that the 2012 revenue figure was not confirmed yet, saying that the “numbers were still coming in.”

The Government aims to make Malaysia into a “world-class” data center hub, naming it as one of the 131 entry-point projects (EPPs) under the Business Services NKEAs (National Key Economic Areas) of the Economic Transformation Program (ETP). The ETP itself aims to transform Malaysia into a “high-income” economy.

Earlier at the summit, Multimedia Development Corporation (MDeC) chief executive officer Datuk Badlisham Ghazali attributed part of this to the Malaysian Government’s “clear commitments to support growth in this sector.”

“The Government has invested approximately RM14 million (US$4.7 million) into various programs to raise the game of our operators.,” Badlisham said, adding that this was part of the ‘3Cs’ MDeC has been driving: Enhancing the capability, capacity and credibility of Malaysian operators.

“Under one such program, MDeC is providing partial funding of up to 75% of the total cost to Malaysian based data center service providers which want to certify that their data centers comply with international design, construction and best practice standards.” Speaking off-the-cuff while reading Badlisham’s speech, Wan Murdani (pic) also noted that the revenue figures for the data center industry in Malaysia above only covered outsourced data centers, and did not include “captive” data centers operated by enterprises for their own use.

“The Datacenter Dynamics 2012 Global Census, a worldwide survey of the data center industry, shows that total investment in data centers has grown from approximately US$86 billion in 2011 to US$105 billion in 2012, a rise of 22.1%.

“Meanwhile, the forecast for 2013 shows a slower rate of growth but still at a very healthy 14.5% over 2012 levels, with a further US$15 billion of additional investment,” he added.

Subramaniam, who is also chairman of the NKEA Business Services Steering Committee, said the industry is seen as being able to contribute significantly to the country’s economic growth, and is projected  to contribute RM2.4 billion (US$800 million) to the Gross National Income and create about 13,290 jobs by 2020.

Acknowledging that countries such as Singapore and Hong Kong have a lead, he said there was still a “clear opportunity” for Malaysia in the region.

“The data center market in Asia Pacific is projected to increase by 16.3% in revenue annually to reach US$3.4 billion in 2014. And due to higher wages and rising real estate costs, the revenue growth of the more established hubs is declining.

“This simply makes Malaysia a natural and preferred location for data center investment,” he said in his speech, adding that the country’s political stability and lack of natural disasters were further advantages.

When pointed out that Singapore has many of the same advantages that Malaysia touts, Subramaniam said Malaysia still had clear advantages in terms of physical space, as well as lower power and labor costs.

However, he said Malaysia did not intend to compete with its neighbor down south and wanted a “synergistic” partnership with Singaporean data center players, which is why an MSC-status area has been created within the Iskandar Malaysia economic development hub in the southern state of Johor.
MSC Malaysia or the Multimedia Super Corridor project, overseen by MDeC, aims to drive ICT development in the country with special incentives and guarantees for eligible companies, whether local or foreign.

“As Singaporean players run out of space, they can expand into Iskandar,” Subramaniam said, adding that he did not see this as cannibalizing the Malaysian industry but as allowing both countries to grow beyond their present limitations. In his speech, the minister declared that Malaysia has a “good future” when it came to the data center industry, “as long as we get our act together.”

He admitted that among the challenges were the telecommunications infrastructure and the relatively high costs of bandwidth in Malaysia and of international transit link charges.

“In developing this sector, we will have to look at many areas in which we need to improve, and MDeC has that as one of its responsibilities,” he said.

While not going into details, MDeC chief operations officer Ng Wan Peng (pic) said that the agency was “very aware of these issues, but we can’t resolve this overnight.”

“We’ve been in discussions with the data center industry to identify pain-points, and will continue to engage with providers as well as regulators and authorities such as the MCMC (Malaysian Communications and Multimedia Commission) to bring down the total cost of doing business,” she said.