Malaysia’s ICT salary growth at its lowest rate in 8yrs 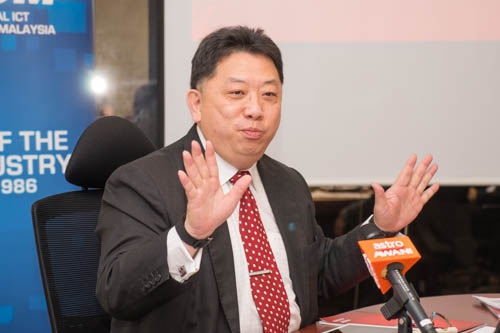 SALARIES for information and communications technology (ICT) professionals in Malaysia are expected to rise, but at a slower-than-expected rate, according to the National ICT Association of Malaysia (Pikom).

Furthermore, this was the lowest growth of ICT salaries in eight years, Pikom research committee chair Woon Tai Hai (pic above) told a media briefing on the association’s latest ICT Job Market Outlook report at its office in Petaling Jaya on Aug 11. The ICT industry had expected a downturn of sorts, but it did not expect one of such magnitude, Woon said.

“Perhaps it is also a wake-up call for the industry to realise that although salaries have been growing, future salary growth cannot be taken for granted,” he added.

Just as Pikom found in its report last year, the ICT salary gap is continuing to widen across all job categories. Specifically, senior managers earned 6.27 times the salary of fresh graduates in 2015.

“Though these gaps will always be inherent, the continued widening of these gaps is not healthy … as it may deter fresh graduates from entering the industry,” said Woon. But it’s not all doom and gloom, with e-commerce is acting as a growth catalyst for the overall ICT industry.

“It has been a challenging 2015 for the industry, but we have achieved positive growth thanks to the expansion of the ICT services sector to include e-commerce,” said Pikom chairman Chin Chee Seong, aka C.S. Chin (pic).

Woon concurred, saying that the outlook for the ICT industry is expected to be good over the next few years because of the opportunities presented by e-commerce.

By Pikom’s reckoning, the retail e-commerce market in Malaysia is worth about US$1.5 billion, and 80% of the country’s 20 million netizens are online shoppers.

The ICT Job Market Outlook report found the share of e-commerce in Malaysia’s economy had increased from 3.6% to 4.8% from 2010 to 2015, thanks to the rising middle-level income population and improved broadband penetration, amongst other factors.

“Once we get broadband out to rural areas the potential of this market is massive,” said Woon.

According to the Ministry of International Trade and Industry, e-commerce in Malaysia currently contributes about 5.8% to the country’s Gross Domestic Product (GDP) and is expected to contribute between 9% and 10% by 2020.

However, e-commerce in Malaysia still lags behind countries such as China and the United States whose e-commerce contributions to their GDP are at 21% and 35% respectively.

Although 40% of e-commerce spending in Malaysia goes to Chinese and US web-shops, there are issues with fulfilment, different jurisdictions, regulations, cross-border logistics and compliance that need to be addressed, according to Pikom. These include international marketplace collaboration, setting up of an AEC e-fulfilment network, and lifting trade barriers among Asean members as well as to China, India, Japan and South Korea.