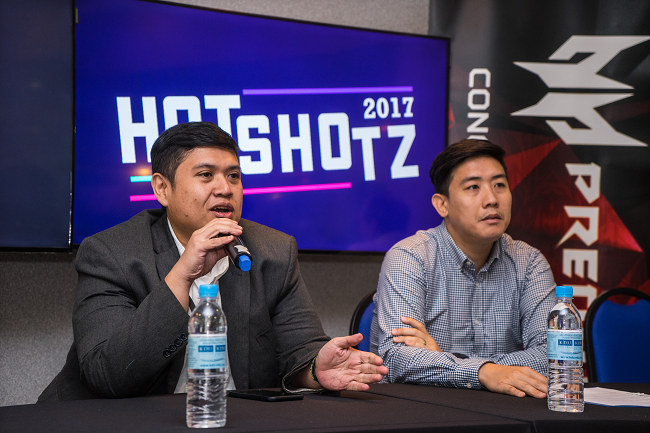 AFTER five rounds of fierce yet fun qualifiers, hosted by five different universities, Malaysia’s eGames festival, HotShotz 2017, is now gearing up for its grand finale where over 250 finalists, all amateurs, from seven game titles will come together on July 22-23 to compete, win and hopefully move on to be the next international eSports stars from Malaysia.

“Acer is dedicated in developing products that push boundaries. Our flagship gaming laptop - the Predator 21 X is one such example. That is why we are extremely excited to showcase Acer's gaming products, especially the Predator series to gaming fans and enthusiasts at the Hotshotz eGames Festival. The Predator gaming series offers a new level of gaming experience with its aggressive design and powerful features,“ says Jeffrey Lai, Product Manager, Acer Malaysia.

“We see HotShotz as a platform to reach out to esports youth audience in Malaysia due to their on-ground events in local campuses. It has been very encouraging to see players competing to be the best in competitive PlayStation 4 titles like Street Fighter V, PES 2017 (Winning Eleven 2017) and Call of Duty: Infinite Warfare.” says Teoh Wah Keong, Marketing Manager of SIES.

Meanwhile, encouraged by the number of participants and level of interest which HotShotz has garnered, DNA founder, Karamjit Singh says, “we would like to continue to play a key role in speeding up the pace of development of Malaysia’s eGames ecosystem by organising more events like HotShotz.”

While there is no data yet on the entire Malaysian eGames, ecosystem, according to estimates, the Malaysian video games market was worth RM1.26 billion (US$293 million) in 2015. This is an increase of 30.9% from 2014, making Malaysia the 26th largest games market in the world and the third largest in Southeast Asia [Since then, Malaysia has moved up to become the 21st largest gaming market].

Malaysia is also home to a mixture of around 50 international studios, local outsourcing studios and independent studios. Among them are Codemasters Malaysian Studio which handles the artwork for some of their biggest titles including Dirt4, Grid2, Micro Machines World series and F1 2017.

Streamline Studios, an independent outsourcing and game developing studio is set-up right in the heart of Kuala Lumpur. The company has been providing digital content outsourcing services for AAA and mobile titles for 15 years including several platinum selling hits like Gears of War, Unreal Tournament and Ghost Recon. The Malaysian team also worked on franchises such as Street Fighter V and Final Fantasy XV. An interesting point about Streamline is that it originally began in Amsterdam, Holland and with a small set-up in Malaysia but has since relocated its entire presence to Malaysia.

And not forgetting our very own local outsourcing studios such as Lemonsky Games and Passion Republic.

It was this broad ecosystem approach of HotShotz that attracted the Malaysian Digital Economy Corporation as a sponsor.

“The gaming market in Malaysia is experiencing tremendous growth and there is a strong push to have Malaysia become the regional game hub for Southeast Asia. MDEC is working on various initiatives to build a gaming ecosystem and our partnership with HotShotz provides a platform to not only bring out talent in our young gamers but also for our 10 independent game publishers to showcase their games, at the finals.” MDEC’s vice president of Creative Content & Technologies Division, Hasnul Hadi Samsudin said.

With one of the clear gaming trends in SEA being the move to mobile, Digi Telecommunications Sdn Bhd, has strongly staked a position as being the ideal partner for gamers on the go.

“We are delighted to be one of the sponsors for Hotshotz. Tournaments like this bring out the best in Malaysian gamers and we are excited to be a big part of it. We hope to unearth more local eSports champions who may someday join the ranks of great teams that have come on-board to partner Digi as they dominate the international gaming scene,” said Michael Chung, Digi’s Head of Games from its Digital Products and Services business.

Stressing Digi’s commitment to providing great user experiences for gamers through its consistent high-speed 4G Plus network, Chung also highlights that Digi aims to provide easy and affordable ways for gamers to get the most of out of their gaming experience.

"Codemasters is excited to have a presents at HotShotz. We are looking forwards to show our latest releases to the guest and visitors.” Studio Manager, Andre Stiegler says.

HotShotz would not have been possible without the strong support from KDU University College which came in as Venue Host when Hotshotz was still an idea germinating, back in Sept 2016. And just as Digi’s Chung and MDEC’s Hasnul pinpoint, to KDU as well, it is all about the talent.

“One of my biggest objectives is to create a critical mass of skilled game development talent for this growing industry as well as to support the other areas within this field. This includes creating awareness, and visibility about the growth, opportunities and career options in this industry. Malaysia needs to achieve this critical mass of skilled quality talents fast, as without it, it is difficult to find support, retain talent and attach international visibility and credibility. We hope that by supporting HotShotz, we can spark interest in young talented Malaysians in this field and also create an awareness for this industry that goes beyond just creating games or playing them,” KDU University College’s Tan Chin Ike, head of school for its School of Computing and Creative Media says.