MICROSOFT Corp is reaching out to its customers across Asia Pacific to alert them it is less than 100 days to the end of support deadline for its Windows Server 2003 operating system (OS) – the company will cease support and stop security patches for the OS on July 14, 2015.

This is already an extended date and is based on its standard lifecycle support policies, the company said in a statement.

IT leaders need to move quickly to protect the applications and information residing on old servers, Microsoft warned, while also plugging the benefits of moving to a more modern platform like Windows Server 2012.

According to Spiceworks, a global professional network of more than five million IT professionals, 59.8% of organisations which use its tools in Asia Pacific are still running at least one instance of Windows Server 2003 as of March 2015.

This represents only a drop of five percentage points in Windows Server 2003 usage since June 2014.

In Singapore, 66% of organisations which use Spiceworks tools are still running at least one instance of Windows Server 2003 as of March 2015, higher than the Asia Pacific average.

However, this represents a seven-point decline in Windows Server 2003 usage since June 2014, Microsoft noted.

For companies still using Windows Server 2003 after the end of support deadline, these servers will be particularly vulnerable as no new security patches will be made available.

This is especially critical, given the fast-paced evolution of security threats, Microsoft said.

In fact, since January 2014, 47 new vulnerabilities were identified on Windows Server 2003 according to Secunia, a global player in software vulnerability management.

“IT leaders across all industries are now managing an infrastructure that demands support for cloud, mobility, social and data-intensive applications.

“In addition, the increasing security and privacy threats are pressuring businesses of all sizes to transform in this new mobile-first, cloud-first world,” he added.

IDC on the business benefits of modernising

There are numerous benefits for IT decision makers to completely move any of their operations off the old platform to newer platforms like Windows Server 2012 and Microsoft’s cloud platform, Azure, the company declared.

In December 2014, IDC Asia/Pacific undertook a study of 88 organisations in Asia Pacific to understand the business benefits gained by businesses which moved to Windows Server 2012. These organisations were from Australia, Hong Kong, Indonesia, Malaysia, the Philippines, Singapore, and Thailand.

Entitled Understanding the business value of migrating to Windows Server 2012, the study was commissioned by Microsoft and Intel, to understand the full benefit from investments in a modern IT infrastructure.

The survey found that companies that have made the migration have seen positive outcomes in three key areas:

This was driven by the Windows PowerShell feature which is available in Windows Server 2012. Automation is a critical feature for IT to minimise time and errors associated with repetitive tasks, Microsoft said.

The IDC study shows that 37.5% of smaller organisations are using PowerShell to automate an average of 10 tasks. Prior to the introduction of PowerShell, 15.6% of these organisations had no automation whatsoever.

For large organisations, 33.9% are using PowerShell to automate an average of 19 tasks. Almost all or 94.7% of this group already had some levels of automation, as would be expected in an enterprise environment.

3) Reduced manhours, giving more time back to IT

With increased capability to automate in Windows Server 2012, IT organisations saved manhours doing repetitive work, which allowed their IT staff to focus on other things.

The study shows that the average number of manhours per month saved was 20 for smaller organisations and 30 for larger organisations. (Click to enlarge infographic below). 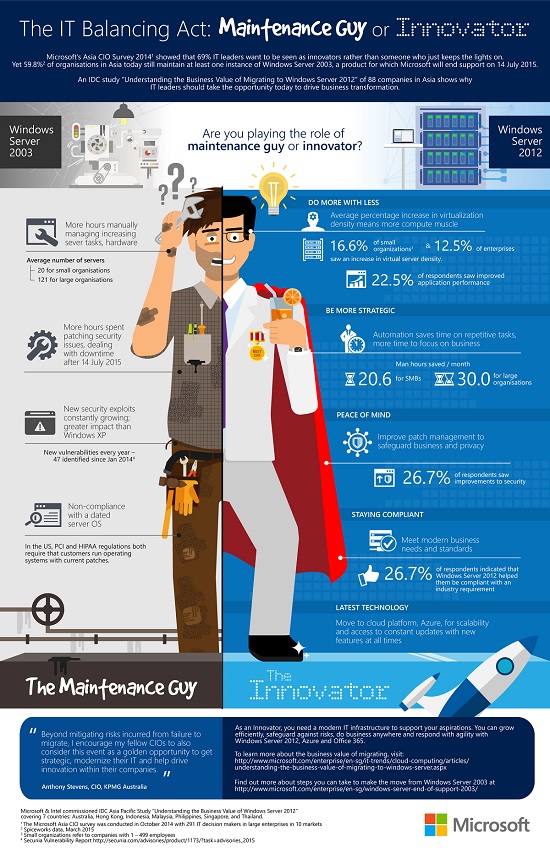 The IDC study found that these companies also experienced improved levels of security, ability to maintain compliance, manageability and overall performance in their IT infrastructure after the adoption of Windows Server 2012, Microsoft claimed.

“CIOs (chief information officers) may have misconceptions that migrations will be too costly an exercise for their organisations,” said Simon Piff, associate vice president, Enterprise Infrastructure, IDC Asia/Pacific.

“However, delaying migration may incur greater costs in the long run, with downtime associated with security or compliance risks, more resources being used to support outdated servers or creating workaround solutions,” he added.

For more information and resources on the end of support for Windows Server 2003, go here. 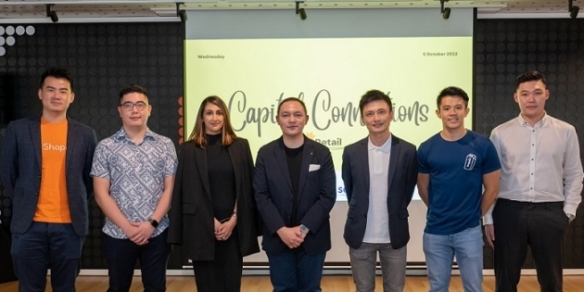