ONLINE behavior in three of Asia’s largest economies is changing rapidly as the rise of Internet penetration, social media and its associated activities, and the proliferation of mobility, permeate the society they represent, according to a new study by Forrester.

In its recently released report entitled “Understanding the changing needs of online consumers in Asia Pacific 2012,” the research house noted that while China, India and Japan are all at different stages of technology adoption, several online and mobile behavior trends have emerged that are common between the three nations.

Authored by Reineke Reitsma, vice president and research director for Forrester, the report surveyed 16,616 Asia Pacific (APAC) consumers and utilized two surveys to find out about their use of the Internet for media, entertainment, shopping, communication and social computing. To put Internet uptake and mobile usage into a broader context, Forrester also incorporated its ForecastView data, showing predicted adoption up until 2016 (click to enlarge chart).

The combination of these two sets of data allowed the research firm to create a comprehensive picture of online consumers in APAC today, said Forrester.

The first salient point of the study is the fact that Internet users are increasingly online, a trend that is becoming a norm in Asia Pacific, said Reitsma.

“Our 2012 data shows that for the first time in years, Asia Pacific online adults reported a decline in the amount of time they spent using the Internet compared with 2011.

“Our analysis reveals that ‘being online’ has become a fluid concept and that consumers no longer consider some of the online activities they perform – such as Facebook updates – to be activities related to using the Internet.

“With the Internet always on, consumers don’t register that they are actually using an Internet connection.” 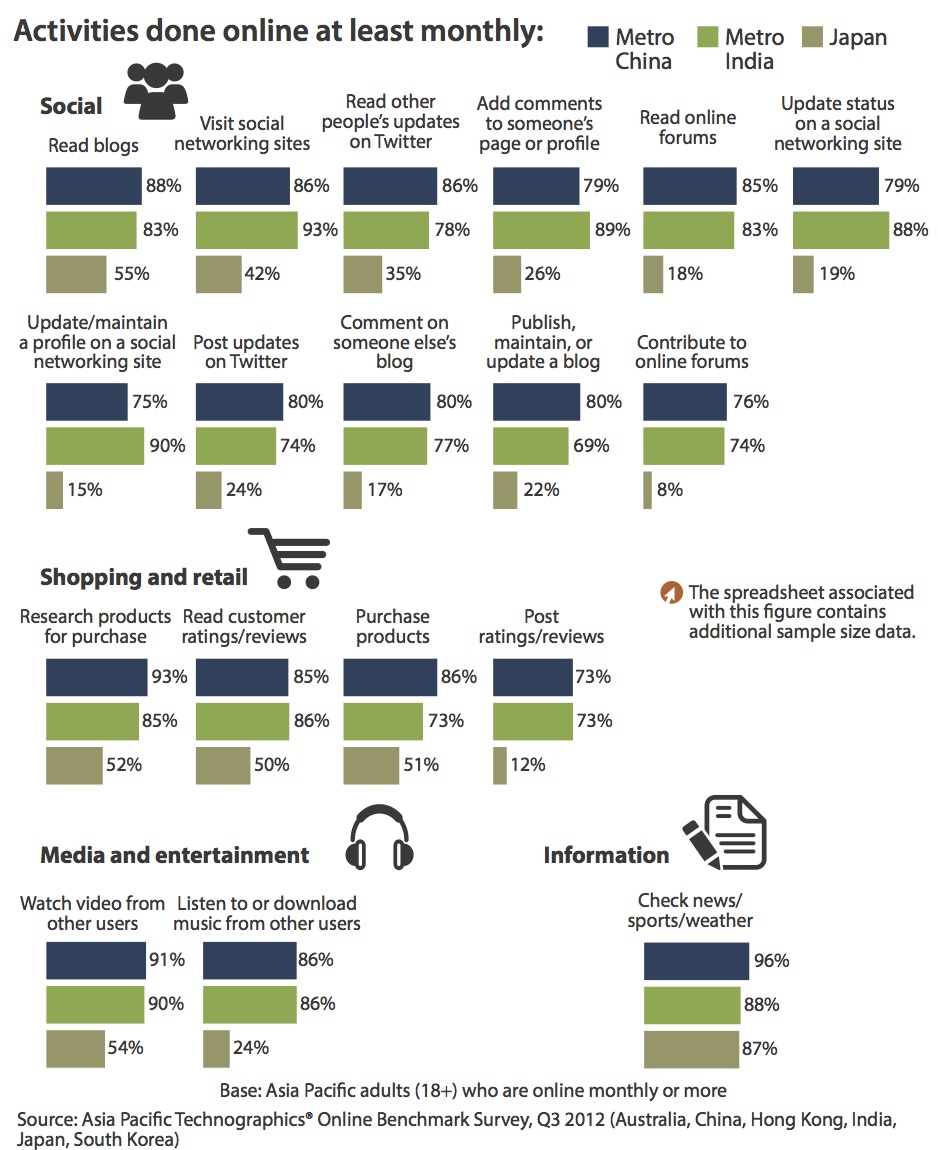 Besides the revelation that time spent online has decreased, Reitsma noted that social [media] activities are also increasing across the APAC region. She said there was an average of 5% growth in social activities in 2012 over 2011 among online adults in metropolitan India; 12% in metropolitan China; and 24% in Japan.

“The jump in uptake in Japan is quite impressive and shows how relevance can drive change,” she explained. The uptake has risen since 2011, largely due to the usage boost around the [Fukushima] earthquake in 2011 as social media played a vital communication role during the disaster, and people kept on using it afterwards.

In India, Reitsma said that with the increasing popularity of social media, many companies, including consumer goods firms like Ford India, Maybelline and SpiceJet began to leverage the medium for a wide range of outreach activities.

The survey also revealed that mobility is becoming a big factor in moving people away from their PCs towards their smartphones.

Reitsma noted that as smartphone adoption increases in APAC, 90% of mobile phone owners in metropolitan China, 81% in metropolitan India and 54% in Japan are now using the mobile Internet at least monthly. This represents growth of 8% in China, 7% in India and 13% in Japan over 2011.

“In Japan, the popular social network Gree has pretty much given up on PCs as the majority of its users access the network via their mobile phones,” Reitsma said. “And about one-third of Facebook’s users in India appear to access the service only from a mobile phone. Also, young consumers in India have been particularly quick to adopt data connectivity on their smartphones as more than half of all data users are less than 25 years old (click to enlarge chart).

“This represents 19% growth in China and 29% growth in India over 2011. The downloading and use of mobile apps also showed rapid growth across metropolitan China, metropolitan India and Japan.

“For example, mobile app usage increased 80% in metropolitan China and more than doubled in Japan and metropolitan India. In December 2012, 75% of Weibo users accessed the website via a mobile device compared with 68% in Q3 2012,” Reitsma said.

She added that in the light of these new trends, companies would need to understand the dynamics of each market and how different segments within that market would need their own specific strategy and approach.

The top consumer trends for 2013, according to Ericsson