OUTSOURCING and crowdsourcing marketplace Freelancer.com has officially launched in Malaysia, seeking to grow its user base and offer access to affordable project-based talent for small and medium-sized enterprises (SMEs).

Willix Halim (pic), Freelancer.com’s vice president of growth, said that the platform currently has more than seven million users from 234 countries and regions.

Internationally, it claims over 4,500 new users daily, a figure which has been exponentially increasing since the company was founded in 2009. From a headcount of 20 two years ago, the company now boasts 250 fulltime employees.

“We’ve been enjoying an average growth rate of 87-90% and expect that to continue,” he said.

It counts other outsourcing marketplaces such as Elance and oDesk as competitors, both boasting similar user volumes as Freelancer, though Halim points out that the two are more focused on high value projects. “We’re more skewed toward quick and easy projects,” he added.

Some of the more interesting projects posted on the marketplace include a dune buggy design, WiFi lawn sprinkler control system, seamless underwear for autistic children and a government logo for Chile.

The platform is especially targeted at SMEs looking for economical ways to run their business, gain more revenue and reduce costs in terms of goods sold and decreased administrative and operations costs.

“Via Freelancer.com, they have an efficient and cost-effective way to harness the human resource potential of Internet users,” said Halim, claiming that employers, especially from developed markets, have saved up to 90% in costs for a project.

“By using our portal, these business owners can post jobs in a secure and organized manner, and find the perfect person to execute their work projects at the most competitive rate, based on bidders’ resumes and work experience,” he added.

He also shared that the out of its seven million users, 4.5million are freelancers while 2.5 million were employers.

The leading source of freelancers is India with 27.87% of all hires, while the combined hires from India, Pakistan and Bangladesh total more than 45%. A large number of freelancers also originate from the United States, amounting to 9.62%.

Users from Malaysia currently account for less than 1% of the platform’s total user base, a situation the company is determined to change in the coming months.

Currently, Malaysia ranks 15th globally amongst the countries with most Freelancer.com users, with 45,808 users, comprising 6,724 employers and 39,084 freelancers. 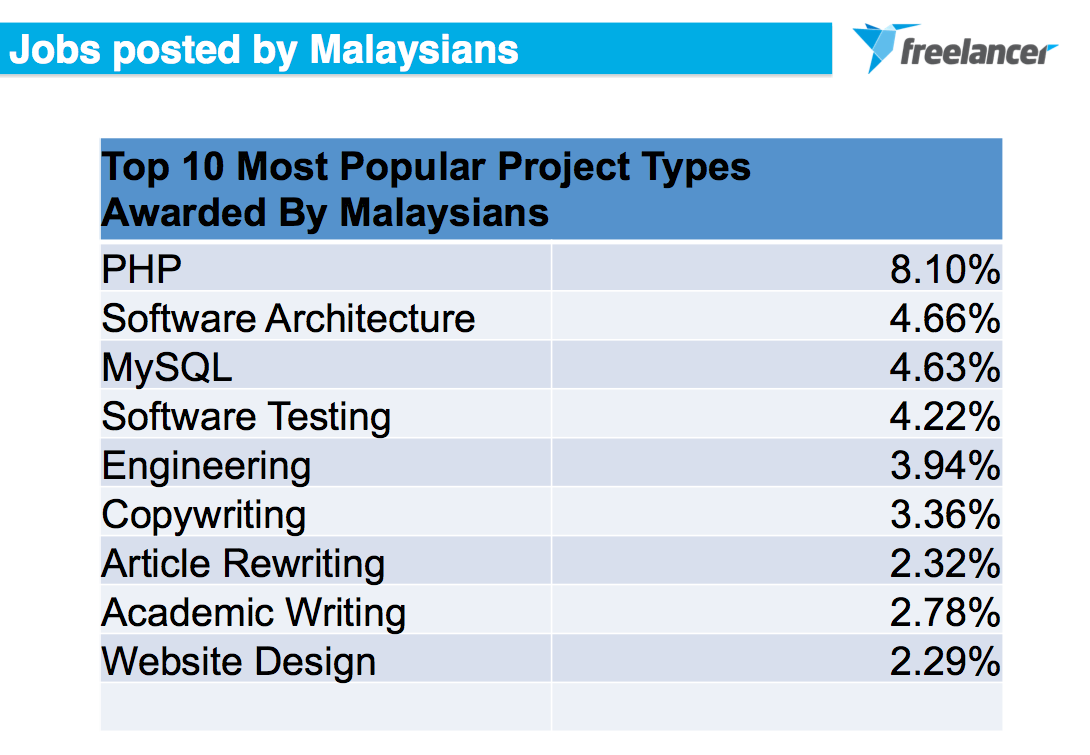 According to Halim, this represents untapped potential in the market with 300,000 being both target and expected number of users. It is considered the third largest market in the region for the company, behind the Philippines and Indonesia.

In line with its SME focus, Halim pointed out that SMEs are already an integral part of the Malaysian economy, constituting 97.3% of the total business establishments in the country and contributing 32.5% to the economy in 2011. According to him, the open job marketplace driven by Freelancer is in line with the Malaysian Government’s target of a knowledge-based economy, which depends upon its ability to build an open, highly skilled economy.

It also offers skilled Malaysians the opportunity to reach out to a global audience, where they can additionally tap on their multilingual communications advantage.

“In emerging economies especially, we empower entrepreneurs to start service organizations,” he said, adding that the site is already available in Malay and 14 other languages.

Halim said that many Malaysian users have already discovered how working online can raise their incomes dramatically, and grow their clientele quickly and cost-efficiently.

“This borderless world of employment opportunity is expected to make a strong impact, as statistics show that out of Malaysia’s estimated population of more than 29 million, 17.5 million are Internet users, including five million broadband users, 2.5 million wireless broadband users, and 10 million 3G subscribers,” he added.

Halim said that Freelancer already supports the ringgit along with 15 other currencies and was currently in the process of finding a country manager to lead growth efforts locally, with regional director Evan Tan based out of Philippines currently overseeing the market.

More localized features are expected to be released in the coming months, with plans in place to embark on user acquisition campaigns primarily via digital marketing channels.

When asked what the expected ratio will be for Malaysia in terms of freelancers versus employers, Halim said he expects it to be an even spilt, unlike markets such as India and Indonesia where it is skewed towards outsourced work being accepted rather than offered. Freelancer works on a project-based bidding model, where prospective employers post up projects for interested users to bid on. Its users specialize in fields as diverse as software development, writing, marketing, engineering, and the sciences.

When asked how the site guards against fraud, Halim pointed to a key feature called Milestone Payments, which accepts an advance payment from an employer for a project. The money is then held in escrow until both parties agree a project has been successfully completed or if the project is in dispute, until the company’s Dispute Resolution Services team has resolved the issue.

Also, in reaction to a recent unearthing of a scammer from India who had tried to defraud the company after logging US$14,000 in fake jobs, the company has also implemented additional security features.

The company stated that effective immediately, it would enforce accounts to have the correct country associated with them, to prevent misrepresentation and impersonation of others.

In addition, to raise the level of security against hacking and phishing attempts, a phone number associated with an account will be used to verify important changes to user accounts, such as method of withdrawal or name on the account.

Halim said that about 70% of listed projects are awarded to freelancers and of that number; about 80% are successfully completed.

To authenticate a minority of individual accounts, suspected of being fraudulent, Halim said that a Government-issued photo ID would be required and background checks conducted via other proxies to determine the authenticity of an account.

Due to the volume of transactions that occur on the platform on a daily basis, the company also deploys proprietary machine-learning algorithms to automate much of the process and claims a 98% accuracy rate for detection.

The platform’s business model is a commission-based one, with a 3-10% fee deducted from freelancers and 0-3% deducted from employers based on the total worth of a project. Depending on payment method, an additional fee would also be imposed by the payment provider.

It supports payment gateways such as PayPal, and accepts credit cards and direct deposits from most international banks. Halim added that team was also in the processing of working with local banks to further support local payments and expedite the process to allow for payment within 24 hours.

Halim also shared his top tips for getting the most out of Freelancer: