ONE of the biggest tech trends that will dominate information and communication technology (ICT) in the coming year, in both the consumer and enterprise space,  is the Internet of Things, two industry experts said yesterday (Jan 22).

Speaking at the first DNA-TeAM Disrupt forum for the year, with the theme What’s hot (or not) in 2014?, Shailendra Soni, industry principal for ICT, Frost & Sullivan, said that there are four forces that would drive the Internet of Things (IoT) towards greater maturity in the coming year.

DNA-TeAM Disrupt is a series of monthly panel discussions and networking gatherings organised by Digital News Asia (DNA) and the Technopreneurs Association of Malaysia (TeAM).

Defined loosely as a system in which the Internet is connected to the physical world via ubiquitous sensors, the term IoT was first coined by Kevin Ashton, the renowned technologist who cofounded the Auto-ID Centre at the Massachusetts Institute of Technology (MIT).

Research firm Gartner defines IoT as a network of physical objects that contain embedded technology that can communicate and sense, or interact, with their internal states or the external environment.

According to Shailendra, the two verticals that are expected to lead the way where IoT implementation is concerned are the logistics and retail sectors.

Asked why this is so, he said, “I think there are clear examples where [a] connected industry has benefited the masses and the two industries that have gained are the retail and logistics sectors.”

Shailendra said that traditionally, the logistics and retail industries have been actively using technologies such as machine-to-machine (M2M) communications, which is a subset of IoT technology. “These two industries have been using M2M for some time in a bid to help them become more efficient, reduce cost and optimise their supply chain,” he said at the sidelines of Disrupt. “They have the best business case to date.”

Asked what opportunities lie ahead, Shailendra said he believes that startups and/ or vendors which can offer specialised applications and solutions can tap into this nascent market.

“There are big solution players out there serving the logistics and retail markets but they can’t possibly serve the entire market,” he argued. “This is where those who can come up with valid solutions can still serve the mid-sized market by providing the right solution to these two sectors.

“Take a large hypermarket for example. They would be looking for specific IoT solutions to help connect them to their suppliers in the most efficient manner. There are clear opportunities in this area which are still not yet fulfilled,” he added.

Shailendra also highlighted another area – the consumer security space – where IoT could be used more in the coming year.

“There is good potential in the home security space, as security is a big concern for Malaysians, especially so with all the things that have been happening over the past six to eight months,” he said, referring to a rising crime rate in the country.

Shailendra said that despite several home security solutions providers having tied up with local mobile operators to sell solutions to end-users over the past few years, there’s still room for entrepreneurs to penetrate this market.

“When it comes to security, there’s one big concern – that is trust. So, entrepreneurs will have to go through service providers or big brand names,” he argued.

Concurring with the view that IoT is going to be big in the coming year, fellow panellist Bikesh Lakhmichand said that some of the biggest consumer developments in the past year involved IoT.

The founder of iTrain Sdn Bhd and 1337 Ventures Sdn Bhd noted that IoT in the consumer space included wearable electronics for sport enthusiasts, low-cost geolocation sensors, and appliances such as 3D printers.

Bikesh said one of the biggest things that will see a shift in commerce play this year is the rise of sensors based on Bluetooth Low Energy (BLE) technology, which he believed is being led by Apple Inc with its implementation of BLE known as iBeacon. When asked by DNA chief executive officer and founder Karamjit Singh, who moderated the panel discussion, who can provide these solutions, Bikesh said any developer could do it.

“We [1337 Ventures] are going to build an application that will allow a retailer to utilise a technology such as iBeacon,” he said. “Say you go into a mall and pass by a pharmacy, our solution is going to know that you’re in there and will push promotions to you.”

Another area that is going to be big is 3D printers and 3D app stores, Bikesh said.

“Imagine having the ability to go online to buy a 3D app, and send it to your printer to get it printed. This will enable people to buy real objects and print them out,” he said, adding that by 2015, the market for 3D printers is expected to grow by 200%.

Yet another development is the connected car, with large manufacturers such as BMW and Audi getting into the IoT game.

“At the recent Consumer Electronics Show in Las Vegas, Audi introduced sensors that integrate with traffic navigation systems,” he said. “If you had a smart electric car, the engine will turn off when you’re stopping at a red traffic light and will start up by itself when it’s green.” 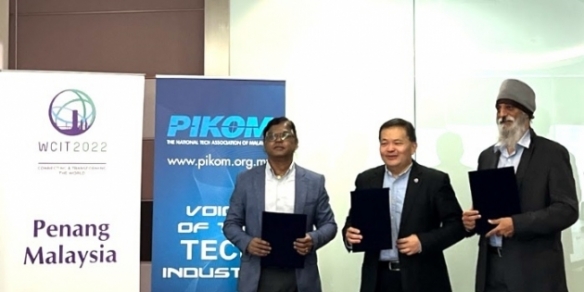