THE technology love-fest that was the 2015 International CES wrapped up in Las Vegas recently with more than 3,600 exhibitors and 170,000 visitors, record highs in the trade show’s history.

Yet one could argue that 2015 continues to be a year of transition, as startups (the largest number ever to show up at CES) and established players experiment with new ideas around wearables, automotive technology, and connected devices in the home.

While the market mainly focused on wrist-based wearables last year, such as fitness trackers from the likes of Fitbit or smartwatches from Motorola and Samsung, 2015 will see wearables give new meaning to the phrase ‘personal technology.’

Intel’s keynote featured a wearable computer the size of a button that can be plucked from your jacket. Curie is Intel’s answer to tiny Bluetooth-enabled, sensor-driven devices that can be integrated into clothes and fashion accessories, with partners like sunglasses maker Oakley firmly in tow.

Tie-ups with fashion brands, like Misfit’s collaboration with Swarovski on a bling edition of its solar-powered Shine fitness tracker, is a clear trend towards a focus on design this year, rather than the cheap, rubbery variants available today.

These tracking functions will also be merged into smartwatches such as Garmin’s new models, or become less conspicuous like Withing’s Activitě Pop.

Smart apparel from Athos that measures how hard your specific muscles are working will hit your wardrobe in 2015, along with biometric shirts for kids from Hexoskin adorning your little ones.

Smartwatches on the other hand, will go the way of the smartphone, relying on a growing app and services ecosystem to do much more than tell the time, as demonstrated by German car-maker Audi when an LG smartwatch was used to unlock the car doors.

And such apps will be key to the success of wearables. Forrester Research’s analyst J.P. Gownder says that beyond the devices, “We'll see a broader focus on services, particularly from companies like Samsung, Microsoft, and Google. Linking services together – connectivity, in fact – was a big theme at CES 2015. Auto-makers like Volkwagen showcased their new app and smartphone integration features (even though it’s late to the Apple CarPlay party), while Hyundai now lets you monitor and remotely control your car with an Android Wear smartwatch via its Blue Link service.

Even television manufacturers are waking up to the fact that consumers care more about connected services than they do about gimmicky features.

For the second year in the row, TV makers moved far beyond displays that required you to wear special glasses. Rather, they introduced user-friendly app-based interfaces, based on open platforms like Android (Sony), Tizen (Samsung) or WebOS (LG), connected to video services such as YouTube and Netflix, and games services like Playstation Now. 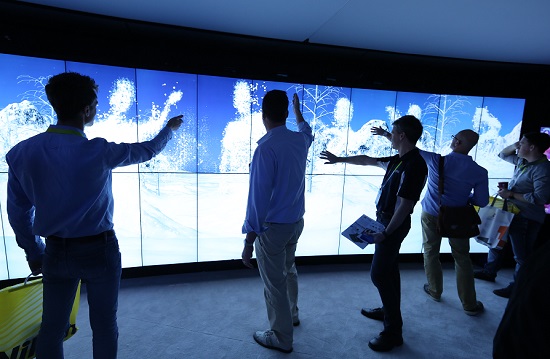 What grabbed headlines though, were still the dazzling curved TV technology from LG and Samsung, Sony’s ‘world’s thinnest’ 4K TVs (at 0.2 inches) and Quantum Dot 4K displays from makers such as TCL, which the company claims, provides the full colour gamut while being more affordable compared to OLED (organic light-emitting diode).

But if these ultra-high-resolution, large screen smart TVs aren’t doing enough for you, then perhaps consider wearing a virtual reality (VR) headset instead.

The highest-profile company here is Oculus VR (thanks to its Kickstarter roots and subsequent US$2-billion acquisition by Facebook) which had a demonstration at its booth that included virtual reality audio to complement the immersive visual experience.

The company however didn’t announce when it would start selling a consumer version of its Oculus Rift head mounted display (HMD), simply because it’s waiting for the content.

According to Oculus VR chief executive officer Brendan Iribe, in his interview with IBT, “We need a suite of content of really fun, compelling experiences that aren’t just hardcore game-oriented, and when that’s good enough it’ll be an easy decision to go to the consumer market.”

That partly explains why the company worked with Samsung to release a special developer edition of the Samsung Gear VR in December last year to entice content producers. The US$200 HMD works with Samsung’s Galaxy S4 smartphones but only offers a paltry 20 VR apps to experiment with.

Still, competition is on the way. A group of companies called Open Source Virtual Reality, led by gaming accessory maker Razer, plans to release a US$200 hacker developer kit in June 2015, to woo developers to create VR content on its platform.

Sony in the meantime, was conspicuously quiet on updates for its own virtual reality headset, Project Morpheus.

What did garner a lot of noise at CES were 3D printers – and more specifically, what you could print with 3D printers. From designer gowns, to a full-blown drum kit, to edible cookies and pizza, or even chocolates, 3D printer makers wowed the crowds with new (and yummy) applications for these boxy units.

The focus this year wasn’t so much to introduce new consumer models but to drive more uses for 3D printers, as well as introduce new materials.

Vendors concentrated their efforts on simplifying the process of creating 3D models on the computer, either through more user-friendly creation tools, or through the use of scanners to duplicate the object. Get ready for a whole new world of creativity in 3D!

So CES may be over, but many of the announcements will turn into commercial realities over the course of the year.

The message on content, services and usability is clear, as consumer technology transitions from being a hardware arms race to adoption of new applications. And that’s always a good thing.

All pictures above courtesy of the Consumer Electronics Association.