Having spoken about the importance of industry working with universities to foster an innovation edge, Norhalim Yunus, CEO of Malaysian Technology Development Corporation talks about local entrepreneurs needing to understand that entrepreneurship is not a short game, of building brands, the potential of a world class green tech cluster and why any policy to encourage buying local is counter-productive to innovation.

ONE of the common complaints Norhalim Yunus (pic), CEO of Malaysian Technology Development Corporation (MTDC) hears from the over 200 companies MTDC has invested in, given grants to or helps with market access is over the lack of confidence of the Malaysian market in their products.

For sure Malaysians don’t have a strong sense of affinity in supporting home-made products and it chiefly comes from being an open economy where foreign brands and products from developed markets are readily available in the country.

But the cries for legislation to encourage and support buying local products as a way to equalize the playing field do not resonate with Halim, as he prefers to be called.

“There are many things that come into play here with regards to locals not buying Malaysian,” he says and this includes business development strategies of local companies to promote their products and ensure high quality.

They need to be able to tell a better story so that consumers are ready to buy their products that are of world class standards.

The quality issue is paramount as consumers must be given the option of buying local products that are comparable (to foreign ones) or even better and in the quest for this Halim does not believe that enacting buy local policies help. Infact they get in the way, “as those policies are not good for innovation and sustained competitiveness,” he asserts.

He points to a Johor based company in the green tech space that has received MTDC grants. Dragonpak Industries (M) Sdn Bhd is an example of a company with world class products, international markets and which should be doing better with its domestic sales.

Based in Johor it produces plastics products made from biodegradable plastics and has an annual turnover of US$19 million (RM100 million). “The company exports 70% of their plastic products overseas, meeting the quality and safety standards of the US, EU including UK, Japan and other countries.”

Another top company in the green tech space, also in Johor, is Heng Hiap Industries Sdn Bhd which received CRDF (Commercialisation of R&D Fund) from MTDC to commercialise its own research on converting waste plastics to high performance plastics.

The company has obtained the EU REACH (Registration, Evaluation and Authorization of Chemical Substances), GreenLabel (Singapore) and numerous international certificates for their products. They also export more than 60% to US, EU incl. UK, Japan, Korea, China etc.

Even more impressive, it has developed its own technology to convert the waste plastics to diesel fuel used to generate 1MW of electricity to power their factory.

“Both these companies have around 30% sales from Malaysia but if you look at the fact that their products are doing well in some of the most demanding markets in the world, you would think that they should be enjoying higher sales in their home market,” Halim poses.

While he doesn’t profess to have the answers, Halim does feel that consumers have to be educated as well when entrepreneurs are building their brands for their home market. “Are consumers ready to buy when the product is world class? Who is educating them? You have to be aware that they are a key part of the ecosystem as well.”

And he cautions that this brand building, this story telling, cannot just be reliant on selling the technology aspect of their products. In this he expresses admiration for Malaysian durian exporters who have somehow elevated the branding of the Musang King variety to such an extent that it has become a much desired product in both China and Jakarta, with consumers willing to pay premium pricing.

On the subject of brand building, Halim feels that the green tech sector has the potential to build a world class green tech branding for Malaysia, joining the Palm Oil sector in the process. “We already have a cluster of companies with strong products and global markets.”

The challenge here is to bring these products together and create a collective Malaysian branding of superior world class products that Malaysians will want to buy and not because of any policy.

The magic ingredient in this gelling of university-industry collaboration, in innovation, in technology, in commercialization and quality processes and products and in creating the right story around Malaysia made products are the entrepreneurs but there’s a problem here.

“You can have a good market and product but if you don’t have the entrepreneur, then it’s not going to come together,” he says of that special breed of individuals who are willing to take risks, whose passion, drive, self-belief and determination helps them overcome challenges to succeed.

But Halim despairs at the hype bubble in the startup world, specifically around unicorns that distorts the reality of the decades long hard work that goes into building successful businesses. “They can’t be given the story that it can be done overnight. This destroys the whole value system. Instead we need to create a group of people who understand that the process of creating a company is often times a step by step process. There is no shortcut to success.”

For instance, Dragonpak is a business that began in 1995 while Heng Hiap is a second generation run company that began as an old newspaper recycling company with one of the founder’s children, a Fullbright scholar, heading the research and commercialization efforts today. 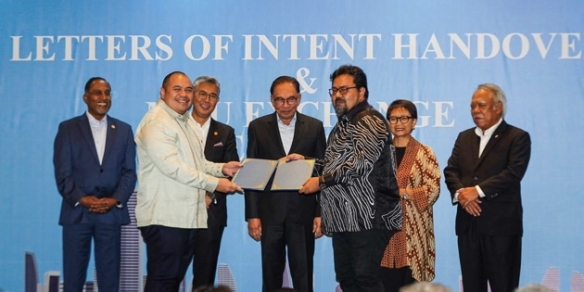