THE e-commerce space is fiercely competitive, and companies are hard-pressed to differentiate themselves from the crowd.

Online shopping mall Blibli.com is trying to do so by embracing as many Indonesian small and medium enterprises (SMEs) as possible, according to Kusumo Martanto, chief executive officer of the site’s operator PT Global Digital Niaga.

“As the original ‘made-in-Indonesia’ online shopping site, we have a commitment to empower Indonesian sellers as well as buyers, so that our efforts can contribute significantly to the country,” he told Digital News Asia (DNA) via email.

SMEs and local products can help boost the Indonesian economy, but many SMEs have trouble developing distribution channels to reach more buyers, he said.

E-commerce is the logical solution, he argued, allowing SMEs to reach a wider network of buyers without having to spend money on promotions or on setting up physical outlets.

Blibli.com itself has taken the initiative to cooperate with Indonesia’s SME and Cooperatives (Smesco) – the official institution responsible for developing SMEs – and Markplus Inc to develop the so-called ‘SMEs go online’ section on its portal, called ‘Gallery Indonesia WOW’ (pic below). Under this initiative, Blibli.com will distribute local SME products all over the country via its integrated facilities, including warehousing and free shipping, and also offering payment facilities with its banking partners and round-the-clock customer service.

“We also have an ‘incubator team’ especifically assigned to acquire merchants and to conduct workshops to help SMEs develop their e-commerce business potential,” Kusumo said, adding that more than 1,000 SMEs have come on board the initiative.

He admitted that the number of local SME products displayed on Blibli.com was still small, at around 20% of the total, but was targeting to increase this to 40% within a year.

“We are more than happy to display and promote local products, especially high-tech products made in Indonesia,” he added, referring to smartphone brands such as Advan, Mito, Evercoss, and IMO.

Such a strategy is needed to stave off competition from the increasing number of foreign-owned online shopping sites in Indonesia, according to Kusumo.

“Currently, many foreign players are operating here without any legal entity. As a local brand, Blibli.com must strive to become the market leader by promoting local SME products,” he said.

The e-commerce potential in Indonesia, and in Asean (the Association of South-East Asian Nation) as a whole, is huge, according to AT Kearney and CIMB Asean Research Institute (Cari) in their report Lifting the Barriers to E-Commerce in Asean. This is especially given the region’s population of 650 million. Indonesia, the most populous Asean country with around 250 million people, is expected to become the region’s biggest e-commerce market, with a potential value estimated at about US$25-30 billion.

This is a massive leap compared with the US$1.3 billion value recorded at the end of 2013.

At a Google-Deloitte event in August, Indonesia’s Minister of Communication and Information Technology Rudiantara said total e-commerce transactions in Indonesia reached US$12 billion in value in 2014.

Compared to the potential value estimated by AT Kearney and Cari, there is still room to grow. Their report also suggested that Indonesia’s e-commerce market can be further driven as more Indonesians get Internet access.

Businesses are aware of the potential, and many are eyeing a piece of this enormous pie.

In an official statement, Telkomsel said it decided to get into the online shopping industry because of the huge potential, and added that it will be leveraging its mobile-money platform, T-Cash.

On Sept 8 this year, PT Global Ecommerce launched its MatahariMall, with a US$500-million financial boost from property giant Lippo Group.

Kusumo is unfazed. “The more new players come in, the merrier the competition – as long as they are really serious” and do not conduct “destructive price wars,” he said.

Since it was established in 2011, Blibli.com has focused on providing quality service instead of competing on price alone, he declared.

“We want to provide a complete service as Amazon.com does, with reliable and guaranteed products,” he said.

According to Kusumo, e-commerce currently makes up only 1% of the total retail market in Indonesia. Therefore, there is still a lot of room for growth.

“With that huge potential and with more players competing, the industry will only grow,” he added. 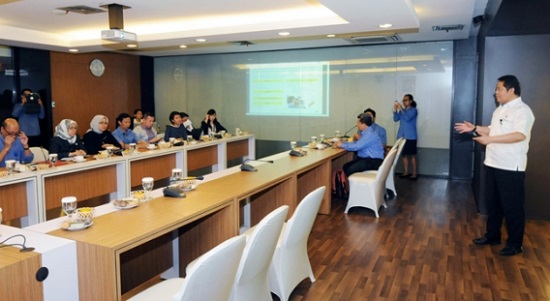 Meanwhile, the Indonesian Government is preparing its ‘Roadmap E-commerce Indonesia’ to further develop e-commerce in the republic.

Rudiantara, after opening the Asia Internet Symposium (AIS) 2015 in Jakarta on Sept 7, told DNA then that the roadmap was in the process of being finalised.

“It is about 95% complete, and will be finalised after we meet with relevant ministries. There are eight ministries and institutions involved in preparing this roadmap,” he said.

These include the Central Bank, and the ministries of Finance, Trade, Industry, Communication and Information Technology.

The roadmap is expected to reduce barriers when it comes to investments in the e-commerce sector, and will address issues like access to funding, taxation, licensing, education, human resources, and distribution channels.

“Currently, there are more than 146 regulations that need to be reviewed,” said Rudiantara.

For Kusumo (pic below), who also serves on the supervisory board of the E-Commerce Association of Indonesia (IdEA), there is an obvious need for such a roadmap. “The regulations must provide a real solution,” he added.

Besides regulations, Kusumo is also hoping for government support for online shopping sites started by local businesses, such as Blibli.com, and funded by Indonesian companies.

“So far we have not submitted any request for government incentives, but we expect the Government to protect local e-commerce,” he said.

One such incentive could be a tax holiday for investments in research and development, he noted.

“If incentives are not possible, then the Government should provide regulations that require foreign e-commerce players to establish a legal entity in Indonesia,” he said.