IF you know about the annual HITB Security Conference or HITBSecConf, then you probably know that at the end of every successful conference, the Hack In The Box (HITB) team will already be thinking about how to elevate the next event with better talks, bigger shows and stronger battles.

It’s the same with HITB’s HackWEEKDAY hackathon – what started two years ago with a couple of lads coding applications whilst lounging on bean-bags has now grown into a widely anticipated hackathon with local and regional developers competing for bragging rights and prizes.

HITB HackWEEKDAY was started back in 2011 to give back to the development community by highlighting and encouraging innovative software ideas and development skills. Since then, four hackathons have been held at both the Kuala Lumpur and Amsterdam editions of HITBSecConf. When asked about his time at HackWEEKDAY, 2012 winner Firdaus Abhar Ali described it as, “Curiosity + experience + fun; what else could I ask for?”

“I always contain myself to a certain kind of methodology, set of practices or even a 'bible' that I follow, in order to deliver a good software/ IT solution,” he says.

“Who knows? Those things that I firmly believe in or practise might not be a good idea from others’ perspective. HackWEEKDAY and HITB events are the one place where I can find out about the software and IT best practices from people around the world,” he adds.

This year, HackWEEKDAY is backed by not one, but three industry heavyweights – Microsoft Corp, Mozilla Corp and Facebook Inc.

The Microsoft Malaysia developer community is incorporating HackWEEKDAY into its software reality show ‘DevSorcerer’ this year. DevSorcerer is an elimination-staged developers’ tournament where contestants encounter and battle real-world challenges. 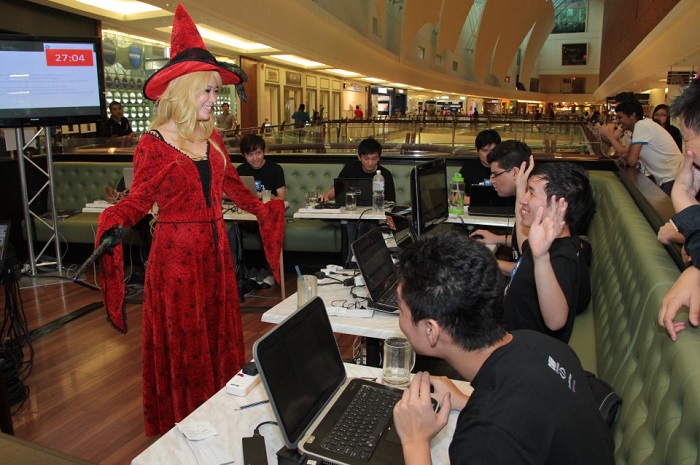 Microsoft’s DevSorcerer winners will also get to pitch their HackWEEKDAY project to investors via the Ideas 2 Invest initiative, a collaboration between Microsoft, Cradle Fund Sdn Bhd and Angels Den.

Not only do participants get to participate in DevSorcerer and get trained with Microsoft’s Most Valuable Professionals from around the world after that, they will be pleased to know that Microsoft has put up a brand new yet-to-be-released, as of this writing, Nokia Lumia 1020 to the best developer that has worked on the SOS/ Emergency application at HackWEEKDAY.

Since the first HackWEEKDAY two years ago, Mozilla has continued to be an active supporter and the main sponsor of the hackathon with cash prizes awarded to the Most Elite Developer every year.

This year, Mozilla is inviting HackWEEKDAY developers to not only develop apps, but also work on new features for the Firefox OS itself.

The Mozilla team will be at HackWEEKDAY to help developers work on prototyping new apps and features to push the Firefox OS platform forward. Therefore, Mozilla is lending out 10 Firefox OS mobile phones for developers to test their applications while at the hackathon.

This year, Facebook will also be at HackWEEKDAY. Its developer and security teams will be engaging and helping developers integrate Facebook Social aspects into their applications.

In particular, Facebook is advocating developers to work on community service applications such as an open data SOS/Emergency alert application which can benefit from Facebook Social integration.

Facebook also chipped in a few iPad minis to reward the best developers who creatively use Social integrations into their applications at the hackathon.

MyTeksi in on the ride

In line with the community theme, online taxi booking service and HITB’s official ride partner MyTeksi will also be at this year’s HackWEEKDAY.

Core developers from the MyTeksi team will also be on-site to work with developers on a community service SOS application aimed at creating a crowd-sourced crime reporting system. By hooking into MyTeksi’s existing network, developers will have the ability to push these SOS alerts to taxi drivers operating within the MyTeksi network.

When, where and how

Developers who are interested in participating in HackWEEKDAY can sign up for the 24-hour hackathon at http://conference.hitb.org/hitbsecconf2013kul/event/hackweekday/. Aside from bragging rights, winners can vie for a record number of prizes to be won, thanks to the support of Microsoft, Mozilla and Facebook.

Members of the public are also invited to come and cheer participating developers and meet with the judges and developers from supporting organisations.

HackWEEKDAY will be held at HITBSecConf’s CommSec exhibition area which is free and open to public on Oct 16-17, 2013. Both the HackWEEKDAY and the main HITBSecConf event itself take place at the Intercontinental Kuala Lumpur.

Maverick is an undergraduate student, programmer, volunteer at developer events and is a member of HITB core crew. He is interested in open source, security and the privacy aspects of computer software and hardware. He can be reached via Twitter as @mavjs.