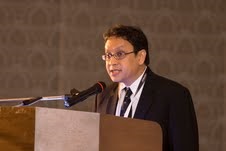 CREST (Collaborative Research in Science, Engineering & Technology), a government initiative to spur research and development (R&D) in the electrical and electronics (E&E) sector, is urging the sector to be more strategic in how it approaches R&D.

“Pouring a huge investment into R&D is no guarantee of success; all of us must learn to be strategic in our R&D,” said its chief executive officer Jaffri Ibrahim (pic).

Speaking at a symposium hosted by CREST on ‘Collaborating and Succeeding in R&D’ held earlier this month in Penang, Jaffri also noted that academia and the business world must learn to communicate in the same language.

“While academia is very instrumental in R&D, and is the backbone of the product, it lacks the soft skills [needed] when negotiating and communicating with businesspeople.

“There are platforms that help researchers achieve this – CREST itself will be working with the Northern Corridor Implementation Authority’s Resource Support Services Centre to provide soft skills training to academics and researchers towards the end of 2013,” he added.

Also speaking at the symposium was Dr David Lacey, director of OS R&D Asia at Osram Opto Semiconductor, who said that relations between industry and academia needs to be improved, as it would seem that it is the industry that always seeks partnerships and relationships with researchers.

“Every month, we visit or engage with a local university,” he said, adding that universities in Malaysia should engage with multinationals as so much can come out from the union.

Getting and retaining talent is another factor, Lacey pointed out after the symposium.

“This is a global phenomenon, and not entirely a Malaysian one. But it is something we must address. Many students now do not want to study engineering, preferring something easier and better. This does not bode well for the sector,” he added.

The symposium drew around 200 participants from Malaysia, Taiwan, Singapore and other countries, from the E&E industry, government bodies and academia.

CREST turns one, sharper focus for its second year

Osram on what it takes to stay competitive