ACCORDING to the recent Google Temasek research, in 2017 e-commerce sales of first-hand goods will reach US$10.9 billion in gross merchandise value, up from US$5.5 billion in 2015, growing 41% CAGR.

In this 2017 e-commerce review, iPrice shares data and findings about Indonesia, such as:

1. The most searched e-commerce sites in Indonesia in 2017 Based on the search interest growth over time data, here is what iPrice found:

Lazada and Tokopedia in the top position

Lazada and Tokopedia are the first and second most searched e-commerce site in 2017.

This happened because of many factors. Some big examples from Lazada: their anniversary promotion, Alibaba increase its stake in Lazada from 51% to 83%, singles’ day, and online shopping revolution.

On the other hand, Tokopedia also had some major momentum such as the new US$1.1 billion investment from Alibaba.

As one of the youngest players, we saw a lot of effort from Shopee to close the gap with other players; from initiating their mobile shopping event, strengthening their seller's community and many other initiatives.

Here is what we found:

To analyse this, we compiled Similarweb’s data from January – November 2017. We ranked the top 10 e-commerce sites based on their average monthly visits in every quarter.

Here is what we found:

Lazada and Tokopedia always in the top two positions

In the table, we can see that both Lazada and Tokopedia are always in the first and second position. The data from Similarweb shows the same results as the Google Trends data.

For Tokopedia we also saw aggressive moves. For example, in January they launched a train ticket booking system, in February they collaborated with Unilever. As a response to the huge number of Muslim people in Indonesia, in June they launched a new feature called “Online Zakat”.

Another minor supporting element for their rank was when Jack Ma the founder of Alibaba Group officially become an advisor for Indonesian e-commerce.

Bukalapak in the top three

Bukalapak stayed in the fourth position Q1 and Q2. But in Q3 and Q4 (Oct-Nov) they were in in the top three.

This could be because in 2017 they did a lot of interesting stuff, from campaigns to a new feature called "Buka Emas” where you can buy gold on their platform.

They also received new funding and now say they are a unicorn.

In Q2 Shopee was in the seventh position. But with all the promotions, programmes, and campaigns, they managed to end in the top five.

Up one for Blibli

Blibli was in the fifth position for Q1 and Q2, but in Q3 and Q4 (Oct-Nov) they went back to fourth position.

In 2017, Blibli made an interesting move by acquiring an online travel startup Indonesia flight. In the same year, Blibli also acquired one of the biggest online travel agencies in Indonesia, Tiket.com.

Blibli also collaborated with one of the biggest FMCG companies, Unilever to have more product options for their users.

In Q1 and Q2, Zalora was not in the top 10. But in Q3 they entered at the tenth position, and in early Q4, they are in the eighth position.

We saw Zalora hold a lot of big promotions during Singles’ Day and on 12.12. All these activities might impact their monthly visitors. 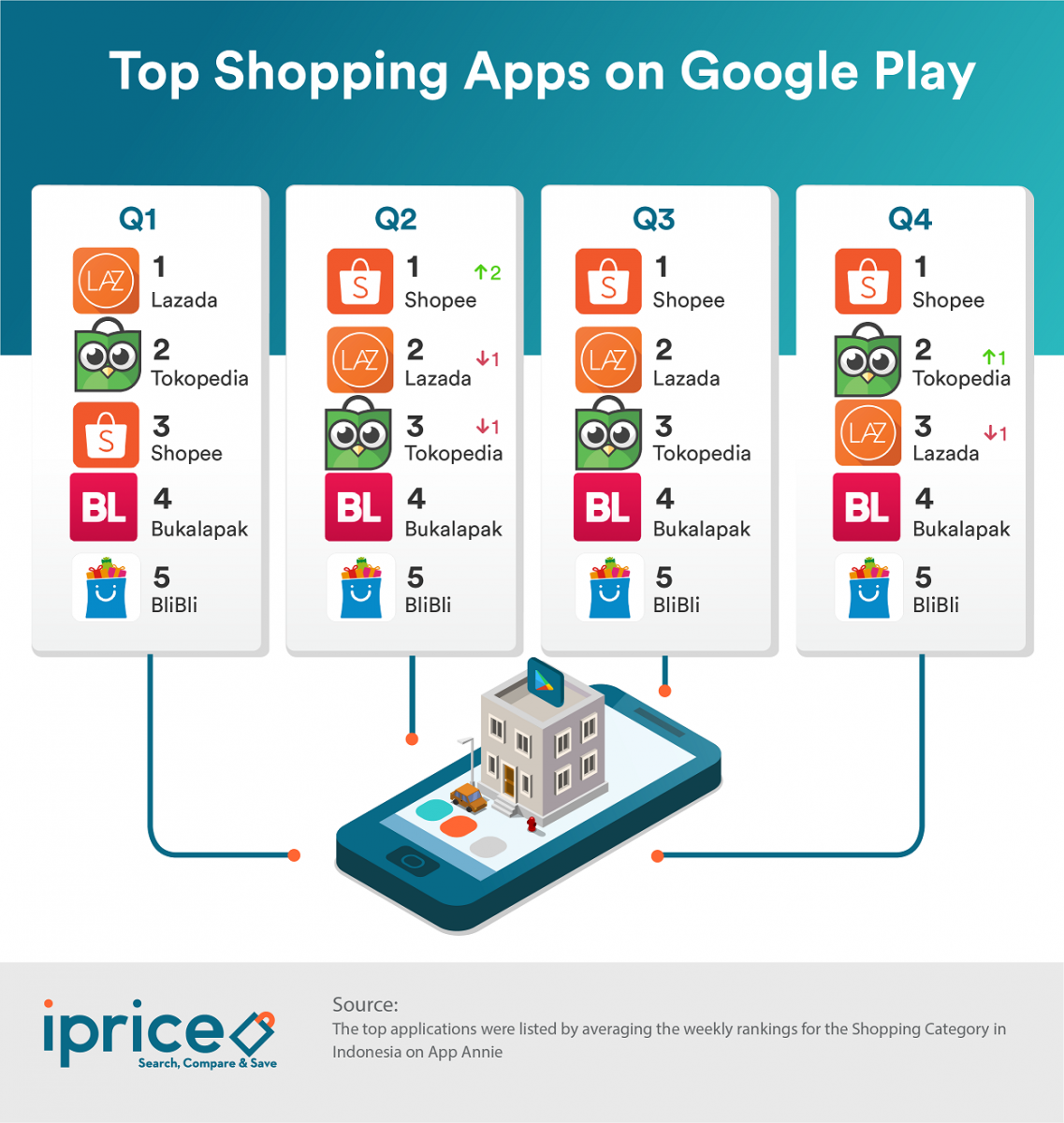 On average, both in Android and iOS, Shopee is in the first position.

This could be because from the time they launched in Indonesia, they branded themselves as a “mobile C2C market place”.

We also saw their special programme called “Mobile Shopping Day” that they initiated in 10.10 this year.

Tight competition between Lazada and Tokopedia

Lazada has a higher rank compared to Tokopedia in Android. Their average rank in 2017 is two, Tokopedia, three.

Based on the data we collected, both in Android and iOS, on average Bukalapak is in the fourth position. The most popular e-commerce sites in social media

On average, Indonesians spends three hours and 16 minutes a day on social media. With these figures, it’s a must for e-commerce players to optimise social media as a marketing channel.

In this part, with the help of our Socialbakers, iPrice collected data on the top five most popular e-commerce sites in social media (Facebook, Instagram, Twitter).

Based on our analysis, it is because of their unique type of content, not only selling products but also educating users. And, their response in Facebook is a super-fast “within minutes”.

As they are a fashion-type e-commerce site, it's crucial for them to create social media posts that focuses on the visual. Instagram is the best place for that.

As one of the biggest Muslim countries in the world, Ramadan is a big event for Indonesia.