DISPLAYING a keen understanding of the role government must play, and when it must step aside, to allow the digital economy and innovative entrepreneurs to flourish, Anwar Ibrahim, leader of the Parti Keadilan Rakyat or People’s Justice Party, who is expected to take over as Prime Minister from Mahathir Mohamad, left a deep impression on DNA’s Digerati50.

As the guest-of-honour, Anwar spent 90 minutes with the Digerati50 at the second annual Digerati50 Networking Cocktail on July 12 in Petaling Jaya. During a dialogue session, Anwar heard of the deep frustration Malaysian entrepreneurs have to deal with, in the face of still strong local market skepticism over the quality of Malaysian created digital services and products.

As Praba Thiagarajah, CEO of Basis Bay Group of Companies expressed, the frustration largely comes from the lack of belief from the market in the capability of local entrepreneurs and its companies to deliver top class solutions to them.

And yet, while he is frustrated in Malaysia, Praba has guided Basis Bay to an expansion in over 22 countries while taking care of the data centre needs of many of the world’s top banking and financial companies.

Praba is not the only Digerati50 entrepreneur who has found success overseas while finding it elusive in their home market. To be sure, the situation has improved over the years, but as Basis Bay’s recent loss to a Japanese multinational in winning the business of a Malaysian based regional bank shows, for some of Malaysia’s largest companies, it is still safer to go foreign. And this really rubs many of our top tech entrepreneurs, raw. 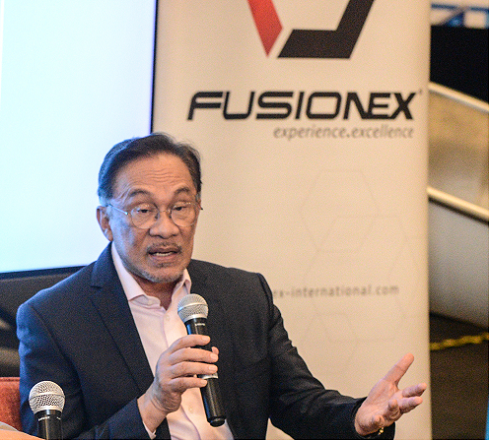 A dark consequence of this default mentality to buy foreign tech expertise is that it throttles and chokes the very go global and go digital aspirations the government has for its companies. Surprisingly, this is a point that Anwar (pic, right) says he is very well aware of, no thanks to Bill Gates and Michael Dell.

“Undoubtedly, Tun Mahathir’s MSC (Multimedia Super Corridor) was a brilliant idea but then we got overtaken by other initiatives with a key reason being that we did not do enough to support local initiatives and software,” he said. This despite the fact that both Bill Gates, Microsoft founder and Michael Dell, founder of Dell Computers personally told the Malaysian leadership, including Anwar that Malaysia must support local entrepreneurs. “They strongly urged me to support our own entrepreneurs, to empower them.”

While conceding that this was only done in a limited manner, Anwar now holds firm to the conviction that “we need to encourage those who are successful”. To this extent, he is even mulling to identify 50 top homegrown tech companies and ensure they are given due recognition.

Strategically, he is convinced that unless Malaysia learns the lessons of the past and changes course, “we will not make it”, meaning that the country will not be able to achieve its ambitions of becoming a developed economy, much less one of the leading global digital economies. And, in poignant moment, referring to the pain and suffering he has gone through from a decade of political enforced incarceration, Anwar vowed, “..my task is to ensure that this country excels as a great nation – with technology and innovation as the focus.”

Anwar’s dialogue with entrepreneurs was just one of the highlights of the Digerati50 gathering. For many of the entrepreneurs, another was the quick 90 seconds one-on-one they got with Anwar to quickly introduce themselves and the pain points they were trying to solve. Anwar enjoyed this session to such an extent that he stayed on an extra 15-minutes to interact with the Digerati50.

Among those who enjoyed this session were Vic Sithasanan and Janet Teo, founders of Hyperlab Solutions Sdn Bhd, with Janet expressing the hope of seeing more assistance from the government. “It was refreshing to see the commitment and level of interest DSAI (the acronym used to describe Anwar) had towards the innovators in the room.” Janet is hoping to see government support in the form of adoption of local technology. “What better way to support us than to be early adopters. Singapore is a good example of being adopters of their own tech,” she says.

Meanwhile Sayf Ismail, associate director, corporate development at the Asia School of Business felt that “DNA's unique in your face style lends to making the Digerati50 a positive energy, highly welcoming cocktail. Definitely not like your typical networking event,” he opines.

One of the pillars of Malaysia’s startup ecosystem, Dr V Sivapalan also had good things to say. “It was a great event, there was a very positive buzz and it was great to catch up with so many leading technopreneurs. It was also good to hear the thoughts of DSAI on technopreneurship and his DNA23 initiative. His strong belief that the future of Malaysia is in technology should bring comfort to the ecosystem. The moderator Karamjit however needs to brush up on his biology as he doesn't know that each human cell has 23 pairs of chromosomes hence the initiative being called DNA 23.”

[Ed: DNA firmly believes in freedom of expression, even though we may not agree with certain opinions.] Sivapalan also gave an update on some industry-government collaboration including hinting that the ecosystem can look forward to a future announcement involving a substantial amount of funding for tech entrepreneurs. MESTECC minister Yeo Bee Yin will be making that announcement at a suitable time.

The rich and frank exchange of ideas and opinions and new connections made certainly left all guests at the Digerati50 networking cocktail pleased with the time invested at the event and with all eyes now on the special 2020 networking edition when DNA will also introduce the fourth cohort of Digerati50.

The second annual Digerati50 Networking Cocktail was hosted by Celcom Axiata Bhd, a leading telco in Malaysia, Fusionex International Sdn Bhd, a leading regional data and analytics firm and Merchantrade Asia Bhd, a leading Money Services Business in Malaysia that is currently disrupting its own business model, before it gets disrupted.