'The Great Resignation' did not hit SEA badly: Robert Walters The much-publicised ‘Great Resignation’ appears to be more muted in Southeast Asia, based on the latest survey from Robert Walters.

In a statement, the recruitment firm said professionals in the region are valuing job security during uncertain times, with more than half (59%) indicating that they are uncomfortable to quit without a new job offer, and 81% of those who have thought of resigning are willing to change their minds, if conditions are right.

These are contributing factors that will retain talent, Robert Walters said.

The survey indicated that hiring new talent remains challenging in Southeast Asia, especially in Malaysia which saw 83% of companies finding it more difficult to do so in the past year.

High expectation on salary and benefits was cited as one of the biggest challenges for sourcing talent, at 66%, it said.

These are among the key findings of the Robert Walters 'Great Resignation Reality Check' that canvassed the insights of over 2,600 professionals and more than 1,100 companies, to better understand the attitudes held towards resignations, staff turnover situations, and unlock retention motivators. 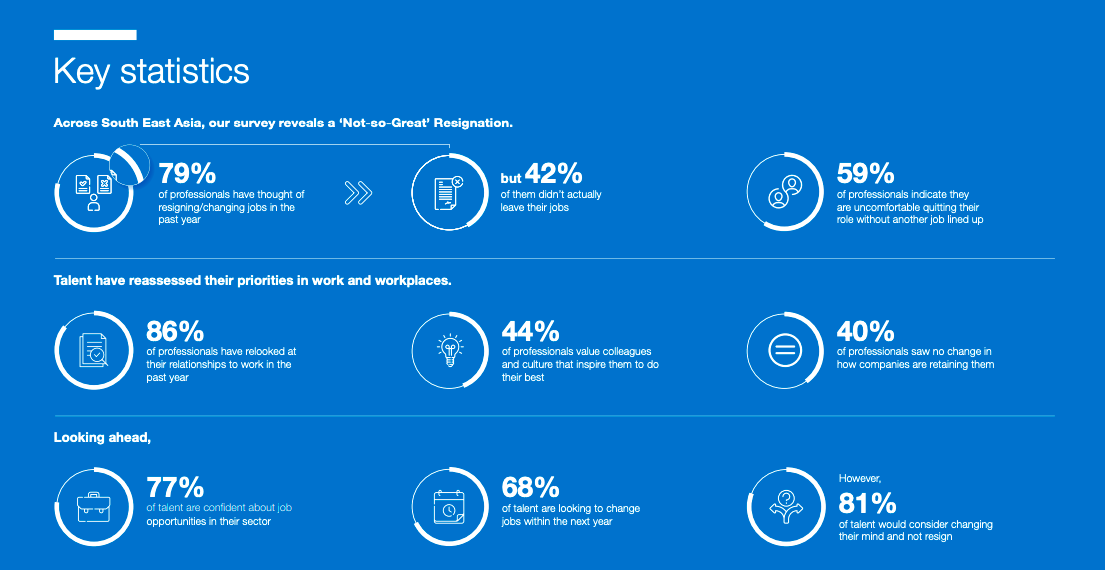 The survey was conducted in June 2022 and spanned six Southeast Asian countries including Singapore, Malaysia, the Philippines, Thailand, Indonesia and Vietnam.

While 79% of professionals surveyed across Southeast Asia had the intention to resign in 2021, close to half (42%) have yet to do so, the report highlighted.

Malaysia saw the most professionals (82%) who have thought of quitting their job in the past year, followed by Singapore (80%) and Thailand (80%).

However, 62% of professionals in Malaysia said they will not quit without a better opportunity lined up, just slightly behind Singapore (64%), it said.

Gerrit Bouckaert, managing director for SEA at Robert Walters, said rather than a ‘Great Resignation’, businesses can expect an accelerated hiring market across Southeast Asia in the coming year.

“Professionals are not quitting on a whim, but rather, they are looking to move between jobs.

“In the face of a possible recession, we expect more cautious professionals, who would only move when they have another job offer on hand,” said Bouckaert. Of the 82% professionals in Malaysia who considered resigning in the past year, 39% eventually stayed on because they have not found a new job yet (58%), are uncertain over new workplace’s culture and suitability (26%), and are concerned about job security at a new company (25%), the study noted.

About four in five professionals (81%) would reconsider their intention of resigning if conditions are right, it noted.

While salary increment continues to be the main determinant, changed job responsibilities (26%) and a change of leadership (24%) are the other crucial factors that will make them change their minds, the report indicated.

In view of this, the survey said employers have stepped up efforts in taking necessary measures to retain staff, such as matching or increasing salaries (58%), offering training and upskilling opportunities (56%) and providing a clear pathway for career development (44%).

However, the report showed that almost half of the professionals (45%) mentioned that they were not aware of changes made by their employers, indicating a gap in the retention initiatives by employers.

It added that a staggering 86% professionals also revealed that they have re-evaluated their other life aspects when it comes to career, now prioritising their mental and physical wellbeing (76%).

Other notable areas include time spent with their loved ones (70%), and the meaning/fulfillment of their jobs (68%), it said.

According to Robert Walters, this corresponds to this year’s findings by Malaysian Employers Federation, noting that many employers are now adopting Flexible Work Arrangements (FWAs) to cater to employees’ evolving needs such as having work-life balance, physical and emotional health.

Apart from work flexibility, the study noted that colleagues and culture that inspire employees to do their best are what professionals value most in an employer (43%). This ranked slightly above compensation and perks (41%).