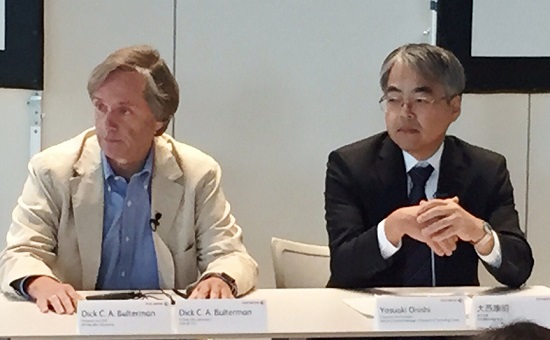 FUJI Xerox Co Ltd has established a new innovation centre in Singapore which it said would deliver technologies that will eventually resolve current and future business challenges.

The Fuji Xerox Innovation Office is the company’s new research base in Asia Pacific and will begin full-scale operations today (Oct 1).

Speaking during a media tour of Fuji Xerox in Yokohama on Sept 29, company officials said the Innovation Office will create “new values by verifying Fuji Xerox’s technologies, including the latest research, by working closely with customers and partner companies in the Asia Pacific region (excluding Japan).”

Following this verification of its technologies, Fuji Xerox researchers who specialise in areas such as image processing and text analysis “will be assigned accordingly to commercialise those values by developing specific solutions and services, with the aim of offering them to customers,” the company said in a statement.

Yasuaki Onishi, corporate vice president and executive general manager of the Fuji Xerox R&D (research and development) group, said Singapore will be an important centre for the company to expand its insights into some of the business challenges that Asia Pacific is facing.

Conceding that Japan’s R&D culture is more mature, he said Fuji Xerox believes that having a centre outside of its home market would be good for the company.

“A lot of our proof-of-concept (POC) projects are focused on Japan’s needs,” he told the media briefing.

“We have chosen Singapore as an innovation centre for Asia Pacific because the country is open to new ideas and the uptake of technology [there] is the fastest [in the region],” he said, adding that this touchpoint is important for Fuji Xerox.

Ideas identified in Singapore would also serve to help Fuji Xerox work on commercialisation and bring those products to the market more quickly, he added.

When asked why Singapore was chosen, Onishi pointed out its regional headquarters was already in the city-state.

He also said that the Singapore Government is ready to try new technology, and this would facilitate cooperation.

Onishi declined to say how much is being invested in the centre, only that it was a “serious investment.”

“We can’t reveal our investment but we made a serious investment into it and we have seven full-time staff there, with a general manager managing the Innovation Office,” he said, adding that the company has already identified over 10 projects to work on.

However, Onishi did not elaborate on what the Innovation Centre will be working on, what its focus is for the coming year, nor what kind of timetable it has with regards to commercialising the R&D work it does.

Dick Butlerman, president and chief executive officer of FXPAL, a wholly-owned subsidiary of Fuji Xerox, said Singapore is important for the company as the needs of Japan and the United States were different from those of Asia Pacific.

“It gives us some sense of the value a potential customer places on technology because in research, we generally don’t deal [directly] with customers,” he said.

“We deal with academia and we know how to do research, but the Singapore centre will give us access to customers.

“In fact, it gives us not only customer interactions but new problems, new challenges, and new features in the solutions they require,” he added.

FXPAL focuses primarily on longer term research in areas such as multimedia, information access, remote collaboration, as well as social and interactive media.

Meanwhile Trevor Clarke, lead analyst with Tech Research Asia – which engages in some consulting work for Fuji Xerox – said that while there are some benefits to being in Singapore, the Lion City was not the best location for such a centre.

On the positive side, Singapore is one of the best places in Asia Pacific to be in if you are setting up an office in the region, he conceded.

“Everyone’s there, so if you’re not there, questions may be raised by customers as to why you’re not,” he told Digital News Asia (DNA) on the sidelines of the media briefing.

“But as for setting up an innovation centre, Singapore may not be the best place,” he argued.

Clarke said Singapore is very different from Hanoi, Shanghai, Kuala Lumpur, Jakarta or Melbourne, and so the needs of these customers will be very varied, depending on where they are situated.

"Asia Pacific is not a market [but] a market of hundreds of markets, and typically those markets are based in cities that people live in,” he said.

“So it’s really hard to believe that just being in Singapore will give anyone the insights a company needs to help customers,” he added.

For a company such as Fuji Xerox, which primarily services multinationals which it already knows, it is pointless to do so from Singapore, Clarke argued.

“So if it’s about talking to the customers, I’m not sure Singapore would be the best place for it to set up,” he said.

“There are many other cities across Asia which may give it [better] access to new customers and new insights for Fuji Xerox to develop new solutions and services.

“Still, if it is successful with this, it’ll be great for Fuji Xerox and its customers,” he added.

Edwin Yapps reports from Yokohama at the invitation of Fuji Xerox. All editorials are independent.

SAP innovation centre in Singapore targeting startups, among others