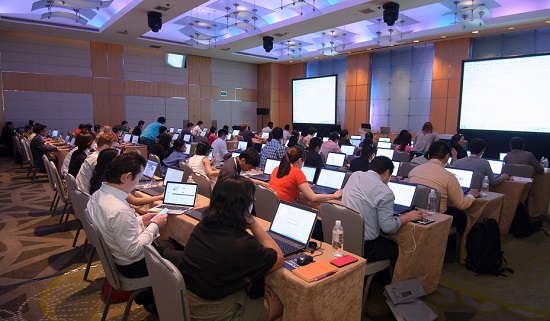 THE data-driven culture is taking hold in both the business and societal spheres, with companies and governments looking to harness the power that comes with being able to visualise data and discern insights from it.

It can even help schoolkids with their homework, as one seven-year-old girl in the United Kingdom found out, in a use case highlighted at the recent ‘Tableau on Tour’ conference (pic above) in Singapore.

According to Tableau Software global chief marketing officer Elissa Fink, the girl did her homework by using the Seattle, Washington-based company’s software to visualise weather data she collected for her report.

Asked what his favourite use case was, the company’s Asia Pacific vice president J.Y. Pook said that one of his colleagues was planning a family beach vacation to Australia, but his young children were afraid after reading news of shark attacks in the media.

“He then created a visualisation with publicly available data on sharks sightings and occurrence of attacks to determine where the hot spots were – which were not at the beach where they would be holidaying, and this data-driven insight helped to allay his children’s fears,” Pook told Digital News Asia (DNA) via email.

While data visualisation has found interesting uses in school and at home, it is its role in empowering organisations that drove the conference, and continues to drive Tableau Software’s business.

The inaugural conference by Tableau Software enjoyed a sold out attendance of more than 250 participants, sharing experiences and tips about how they use data in their business. The company  now plans to host the conference again next year. One such speaker was Jonah Ong, deputy director of Data Analytics & Geospatial Information Systems at the Land Transport Authority of Singapore (LTA), who spoke about his agency’s journey in leveraging data analytics and visualisation to alleviate the strain on the country’s public transport system.

“Only 12% of Singapore’s land are roads, and when the new North South Expressway is completed, that percentage will increase to 13%.

“There is also an unceasing demand for transport here – last year 5.5 million people lived in Singapore, next year it will be 6.5 million,” he said. “That’s a lot of people on a 700 sq km piece of land.”

In March 2012, the LTA, in partnership with public transport operators SBS Transit and SMRT, launched the Bus Service Enhancement Programme (BSEP) to roll out new measures to increase bus capacity and service levels.

“Public transport needs to be the focus, as a way to move large numbers of people around the island. For our buses, we’re looking at an additional increase of 100,000 in daily ridership year on year,” Ong said.

“This large amount of information enables us to do data analysis on what’s happening on the ground – how commuters behave when travelling to different destinations, what the demand is, and how to best optimise the resources we have to meet this demand,” he said.

Ong said that the team at LTA used the data they had to visualise the level of demand and traffic of Singapore bus routes, to identify chokepoints and solve issues such as ‘bus bunching.’

Bus bunching is when two or more transit vehicles, scheduled to be evenly spaced along the same route, instead end up running in the same location at the same time.

“It is important to know when and where to deploy our limited resources. With insights, we’ve been able to strategically place buses along certain high-volume stretches to ease crowdedness, instead of just adding more buses along the route,” said Ong.

“It is also important to be able to predict ahead of time what the trend is going to be like. Moving forward, real-time analytics will come into play – especially for intermodal analytics to see how commuters break up their journey from private car to bus or train,” he added.

Work is already underway on to develop a central bus fleet management system, which will allow the LTA to build and visualise data better, control all buses across the island, and enable such tasks as the dynamic provisioning of vehicles to hotspots.

Asked about the challenges the team faced in pushing this data-driven approach to decision-making, Ong said that the first hurdle is always internal.

“The first key issue is data. At the beginning, you must understand how your own data behaves thoroughly, then work with others to achieve broader insights and perspectives.

“To achieve the end goal, a multi-pronged approach is needed to get insights out of data,” he said.

Ong said that before using analytics across the enterprise, you must first prove you can trust the data.

In the LTA’s case, the team established an 85% accuracy level with its data and analytics results, which were then validated via site surveys conducted by transport regulators.

“They initially doubted our analytics and after validating it, they came back to tell us that it was actually 90% accurate – which gave us the confidence that what we were doing was on the right path,” he said.

Ong said that the use of data and analytics certainly did change LTA’s culture to be more data-driven.

“Keep in mind that I’m from the IT department, not business, and users have always seen us as the devil’s advocate.

“They see us going around showing them things they know, but perhaps not in detail. Some of these anomalies really did surprise them and caught the attention of management, all up to the ministry-level.

“A couple of years back, they dictated that all meetings must be driven by data, and decisions must be made through data.

“If you can’t do that, then it’s difficult to concretise the kind of policy-making that you are doing,” he added.

The other element of trust falls on the IT department itself, according to Ong.

“The other perspective is the trust you need to win coming from IT,” he said.

“You have to know the business and operations inside out, be in their shoes, and demonstrate that you know it as well as they do,” he added.