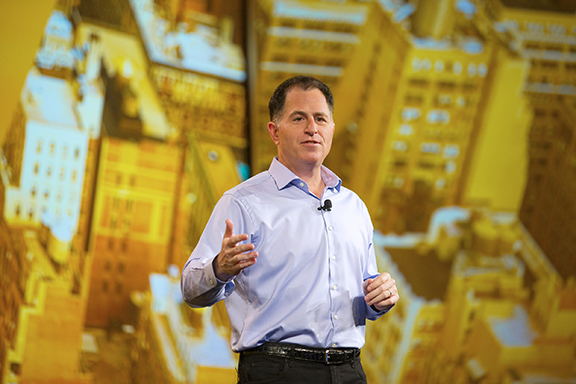 COMPANIES with a public cloud-first-or-only strategy will find themselves facing an uphill challenge in the long-term, as it will not allow companies to operate efficiently and compete effectively.

"Today, cloud is not a place. It is a way of doing information technology. We are already in a multi-cloud world, and it will be even more so in the future. We will all consume IT in a variety of forms -- public cloud, private cloud, hybrid, software-as-a-service, managed services, it will all come down to optimising workload, moving, securing and managing them efficiently," said Dell Technologies chairman and CEO Michael Dell in Las Vegas earlier this week.

"If you have a public cloud first-or-only strategy, I think you will find yourself unprepared in the long-term."

During the keynote, Dell may have hinted that his customers may be looking at switching back to public cloud due to its cost inefficiencies.

"Many customers have told us that public cloud is twice as expensive as on premise, especially for predictable portion of workloads, which in many cases is 90%," he said.

While analysts agree that public cloud first-or-only strategy is not the best answer for IT, they remained optimistic and confident on public cloud's future.

According to a survey done by RightScale in January this year, which compiles the feedback of over 1,000 technical professionals about their adoption of cloud computing, private cloud adoption fell from 77% to 72%. It also revealed that hybrid cloud adoption was down from 71% to 67% year-over-year.

During the Dell EMC World 2017, the company made several key announcements, involving launching of new products as well as new features in its solutions to help companies to have a smoother digital transformation journey.

For a start, it launched its newly-designed 14th generation of the Dell EMC PowerEdge server portfolio -- which Dell Technologies said it's the ideal foundation for cloud, analytics or software-defined data centre initiatives.

Among the enhancement made on the 14G Dell EMC PowerEdge servers include: 19x more Non-Volatile Memory Express (MVNe) low latency storage than the previous generation; one-click BIOS tuning which enables quick-and-easy deployment of many processing-intensive workloads; enhanced iDRAC 9 that offers up to 4 ties better system management performance over the previous generation; automatic multi-vector cooling enables more GPU accelerators in a single configuration, increasing up to 50% more VDI users per server; and more.

In areas of security, the 14G servers comes with System Lockdown --  an industry-first feature that prevents configuration changes that create security vulnerabilities and expose sensitive data.

The severs will be available to key markets starting mid 2017.

Meanwhile, its new Isilon storage platform deliver up to 9 times the IOPS, 18 times the throughput and 21 times the capacity of the closest competitor.

"Since every enterprise has a unique set of requirements to support its business with data storage, a comperehensive portfolio such as that offered by Dell EMC can make processes of planning, acquisition, deployment and ongoing support far easier for most customers than assembling point storage products from multiple vendors," said Enterpreise Strategy Group practice director and senior analyst Mark Peters.

The VMAX 950F, XtremIO X2, Dell EMC Unity All-Flash models, SC5020 and Isilon are orderable this month and will be generally available as early as June 2017.