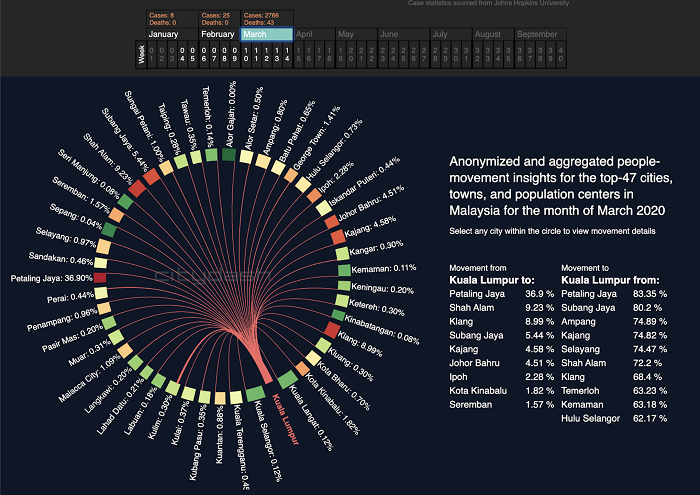 What happens when life gives you a pandemic that disrupts your business? Pivot your business to help disrupt the pandemic.

That is fundamentally what Apu Kumar (pic), LOTaDATA CEO and founder did. CityDash, which was originally designed to give city planners an eye on population flows, has now been re-utilised to track the potential spread of the Covid-19 virus.

In February, they had been in Italy working on project to map out optimal locations for electric vehicle charging stations and solar lighting points.

"That is when they told us, hey this thing called Covid is starting to explode in a very negative way," said Apu, as the virus took grip in the areas around Milan and Venice.

"That is when we had a discussion with them and the government," he recalled. "We realized that what we're providing them in the form of people movement and analysis, for the Smart City use cases, can also be repurposed for public health use cases."

As a result, the company launched a project called "Data for Humanity", to measure and analyse people-movement across Italy. It has since expanded to 12 other countries, including Malaysia, Singapore, Indonesia, Thailand, Taiwan, India, US, Canada, Mexico, Brazil, Italy, and Spain. CityDash presents data about the presence and movement of people in 1,522 cities and areas around the world, based on the collection of mobile GPS signals.

"We are able to get access to anonymized GPS signal pings," explained Apu, adding that they were collected using the GeoSDK in mobile apps with notice and consent, and have an average accuracy of 12 meters.

"Essentially these are dots on a map, we have no idea what the name, email, phone number, any of those attributes are," he said. "But we do know that there were, let's say, 25,000 people in some part of KL from 6pm to 9pm today."

Apu and his team began to inquire, "Where are the clusters?" referring to the localised groups of infected people. "We will then look for any movement patterns we have seen within and beyond the area," he said.

For Malaysia, they are measuring people-movement across 47 cities and towns. "In general, we observed that people were starting to move less in the first 4 weeks in March," Apu disclosed, attributing this to the general awareness created about the direct correlation between social interaction and the spread of the infection.

They can also zoom into finer detail. As an example, he cited the cluster that originated in Seri Petaling. "CityDash can track the anonymized dispersion from that neighborhood to others within Kuala Lumpur and throughout Malaysia in a privacy compliant manner."

"This level of analysis can help municipalities to anticipate the neighborhoods where they might see the next spike in Covid-19 case counts, and prepare for it, without ever requiring personal data."

"CityDash can also measure the impact to business, brands, grocers and retail shopping locations by tracking anonymised footfalls, people visits by hour of day, trends by day of week, average visit duration and frequency of repeat visits," said Apu. "The place-visit analytics are available in CityDash for big box retailers, mom and pop stores, as well as mega malls."

All the way through our conversation, Apu is adamant about the importance of privacy. "Because we have to operate in the EU, we have to anonymize (the pings) so it has to be hashed," he eplained.

"Second, it has to be discarded," he added. The interval varies by country, and is usually between a week and a month.

Even then, the granularity of the data depends on the use case. "If you want to look at five neighborhoods in KL, and how other people moving between these neighborhoods today and yesterday, that would be based on a hash ID," he said.

Taking the bull by the horns

Of course, Apu is very aware the Data for Humanity project was borne out of strife.

"I remember having this call with some of my investors in third week in February, where they were all freaking out because their portfolio of companies are all going straight down."

"And when they asked me, I said, look, we either just all get nervous and try and do what everyone else is doing, (which is) hunt for more business which doesn't exist."

"Or we take the bull by the horns and we start doing things with our platform, without worrying if it is going generate revenue in the near-term."

LOTaDATA managed to leverage its presence in markets like Singapore, Brazil, Mexico and India to reallocate resources.

"Let's use the platform, let's apply the power of our technology, our algorithms and the data that we have access to do good," he said.

"Of course, like any business, our hope is that this goodwill will compound. And at some point in time in the post-Covid world, we will be able to work with back with the same municipalities and the same clients in a profitable way.”
"Until then we will just keep doing what we're doing here."