IT IS Axiata Group’s moment in the sun. It has announced a game-changing merger of its operations with Telenor ASA’s Asian operations to create a 300 million subscriber, nine-country and US$12 billion (RM50 billion) revenue telco.

Predictably, the rush by analysts and media to dissect the financial and competitive implications of the deal, has overshadowed another significant development from Axiata which was announced a few days earlier.

Debunking conventional wisdom that corporate venture funds are not culturally and process-wise set up to be successful when investing in digital companies, Axiata, a telco that declared its intentions in 2014 to transition to become a digital company with the board allocating US$344 million (RM1.4 billion) towards the initiative, has done just that.

But let’s not take their word for it. If money talks, then Mitsui Co of Japan, has given us a US$500 million (RM2 billion) validation of the success of Axiata’s decision in 2014 to launch its own venture capital arm, Axiata Digital Sdn Bhd.

This is precisely the pre-investment value that Mitsui has assigned to the digital businesses of Axiata that is has invested an unspecified amount into. In the process, Mitsui has become a key minority strategic investor and partner of Axiata Digital which comprises three fast-growing startups – Boost, ada and Apigate.

For a Japanese conglomerate, the investment happened quite rapidly from initial discussions in March 2018 to the term sheet in December 2018.

While the investment amount has not been disclosed, I’m told by Mohd Khairil Abdullah (pic), the CEO of Axiata Digital that it is in the “high double digit US dollars.”

The Mitsui investment, coupled with the fact that Axiata Digital still has US$244 million (RM1.01 billion) of the US$355 million (RM1.45 billion) it was allocated by Axiata in 2014 for its digital strategy, gives Axiata Digital “a lot of firepower” to not just rapidly scale the three businesses but also to execute M&A should the right opportunity arise.

But for Khairil, with funding not an issue moving forward, the next step is to look at the specific needs of each of the three startups.

For instance, with Apigate, Khairil says “locking in a large VC from Silicon Valley that has a rich portfolio of content and gaming companies in its stable, would be very beneficial to Apigate.”

Looking for such strategic equity partners, not necessarily based in Silicon Valley, who can add value to each of its three startups is the priority now for Khairil.

As an investor, Mitsui ticks all the right boxes. Not only has it contributed financial firepower, but the large Japanese conglomerate, has 278 subsidiaries across the world and 213 equity-accounted investees, can open doors for Axiata Digital to win new business.

And while other companies invested in by the Japanese conglomerates have struggled to tap into their rich pool of subsidiaries, such has been Mitsui’s cooperation that even before the investment was made official, Mitsui was already opening doors for Axiata Digital in the region.

Sharing one example in Malaysia, Boost had struggled to get an appointment with a Japanese company it wanted to partner with. But one phone call from Mitsui saw the Japanese company roll out the red carpet and a collaboration will soon be announced, says Khairil.

The real story in the deal

While the focus of the Mitsui investment has been on the valuation given to Axiata Digital, left unappreciated is how Axiata Digital has taken the learnings from its close to 30 startup investments from 2014 to 2017 to then decide to focus only on verticals it felt it could win in.

Included in the lessons was the experience of closing and selling three companies which were not meeting expectations while parking others in the Value Added Services (VAS) units of some of the telcos under the Axiata Group. But even here, knowing that the startups could get swallowed up in the corporate culture of the telcos, Khairil says Axiata Digital made sure the startups were of a sufficient size and scale to stand on their own and add value to the telcos they were parked under.

And those that didn’t fit under any telcos were left to grow on their own and just last week, were hived off to a Singapore based investment fund, Pegasus 7 Ventures for US$140 million (RM581.57million) versus the US$48 million (RM199.4million) holding cost of the startups, giving it a tidy almost 2x return.

Launching Boost, ada and Apigate inhouse can be considered a gutsy call as it is the prevailing wisdom that startups need the 24x7 drive, a never-say-die spirit and the passion of their founders to take the fledgling companies through the many pitfalls on the rough ride to scaling a sustainable company. Yet, neither Boost, ada nor Apigate have founders working crazy hours, inspiring their teams and living on the edge, fighting for revenue and funding.

Yet, all three have thrived and are building traction. And Khairil disagrees that the critical startup spirit is missing in the three. “We actually spent six years cultivating that,” he says, meaning that Axiata Digital has learned how to harness that startup spirit from its investments into close to 30 startups from 2014 to 2017.

One example of how it has cultivated a digital spirit is simply in its hiring, with Khairil sharing that at its peak, 87% of the talent in its three startups comprised those who had not worked in the telco world before. This was augmented with top level talent brought in from the likes of Grab, iflix, Google and Facebook.

Making decisions fast and pivoting can be seen in how Boost, which started as a lifestyle loyalty and prepaid top-up app in January 2017, added an e-wallet service in October 2017 and in January 2018 made the bold decision to become the country’s leading homegrown digital wallet. You won’t see this happening in a staid corporate culture.

You also won’t see many corporate VCs crowing about the returns from their investment portfolio and yet, Axiata can proudly point to the number 2.65x. That is the value of its digital portfolio after the investment by Mitsui and sale to Pegasus 7 Ventures.

“I think we are doing ok as a corporate VC considering we don’t have the full flexibility as a venture builder,” says Khairil with a glint in his eye. He’s no doubt excited about the future prospects of the company’s digital portfolio and he would indeed be justified. 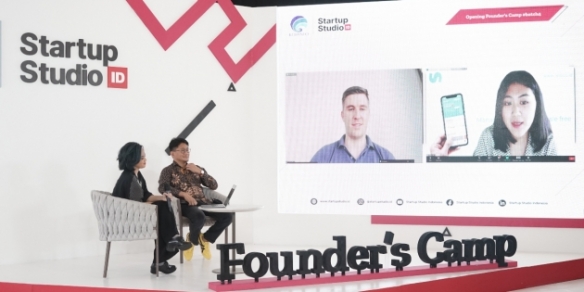