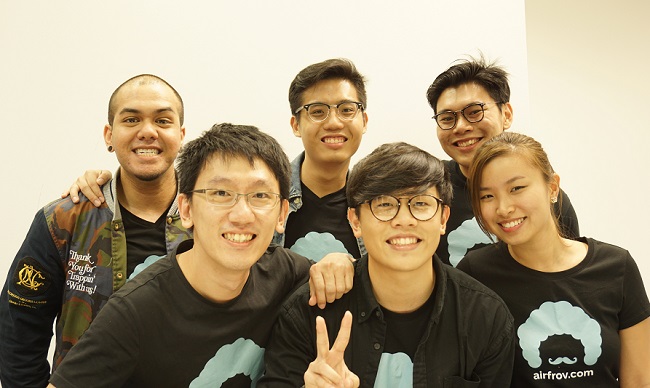 IT is that oft-forgotten hassle travellers have to deal with: When people ask you to buy a product that is only available in the country you are going to. The requests can range from food all the way to bulky items, and you get that twinge of regret for saying ‘yes.’

This is where AirFrov steps in, by connecting travellers with buyers. These travellers now also get a commission, which sometimes can be a greater incentive than the shortlived gratitude of fairweather friends.

Describing itself as a peer-to-peer on-demand marketplace for overseas products, the idea for AirFrov came from cofounder and chief executive officer Cai Li’s own experience acting as his girlfriend’s ‘personal courier.’

“I actually travelled very often in my last job in the plastics business, and had to buy stuff for my girlfriend on almost every trip,” he laments.

“I learnt from my air-crew friends that a lot of people were doing it on a weekly basis – the supply and demand existed, but there was no platform to connect travellers to buyers,” he says, speaking recently to Digital News Asia (DNA).

Thus AirFrov was launched in the first quarter of 2015, and managed to get 35,000 users on board within a year, according to Li.

“The feedback has been very good, the percentage of recurring users is very high,” he claims.

“The main feedback has been that without AirFrov, the only solution is to ask their friends; for some of them, there is no other solution than AirFrov,” he adds.

The mechanics on the AirFrov platform are simple enough: Travellers post information on their trips, while potential buyers post what they want. Should the traveller take up a request, he or she either arranges to hand it off to the buyer personally or via a third-party courier service.

“We do charge a transaction fee of 7% and S$2 (US$1.42) for the bank transfer fee. The buyer will pay us via a credit card for now, which is the easiest and fastest way,” he adds.

As for possible product mismatches, Li stresses that it is the traveller’s responsibility to ensure the item is the correct one.

“We do not moderate users, but we do step in to help during disputes and complaints” he says.

AirFrov had to deal with a chicken-and-egg problem at the start – it needed to get a good number of users on board to hit critical mass, Li acknowledges.

“Initially, there was the issue of trust, but after having been featured in a lot of news articles, this trust issue was solved,” he says.

The trust issue was also helped by the fact that AirFrov holds the money safely until the item is delivered, he adds.

There is also the issue of taxes and duties on items brought into Singapore. Li says that the Immigration and Checkpoints Authority reached out to AirFrov to educate its travellers on this.

“We do our due diligence to ensure our travellers are educated on the need to pay GST (Goods and Services Tax) because the responsibility lays with them,” he adds.

Singapore’s Customs department also has a new app that allows users to declare their items before they return, without the hassle of doing that at the Customs checkpoint itself, which Li says has been very helpful.

The AirFrov platform also includes a price engine to help travellers and buyers decide on the best price based on the item’s actual selling price, but ultimately leaving it to the two parties to negotiate terms.

“The cost is up to the two parties to negotiate, we do not come in with a set price for them because sometimes the travellers can earn a tax refund from their destination country, which can offset the GST,” says Li.

“There are disputes, but it is up to the two parties to negotiate – what we have is a price engine which tells users what the best price is based on past data on the platform, as well as prices grabbed off other websites.

“This helps users make an informed decision,” he adds.

AirFrov is currently looking to expand to other countries in the region, according to Li, although it is currently evaluating which markets would make the best bet.

It landed seed funding earlier from Spaze Ventures, and has just announced additional seed funding from East Ventures. The company has not disclosed either amount.

“Right now the team is very small, the main thing would be to hire key people to allow us to grow faster, from tech and operations to marketing,” says Li.

First the tech challenge, then business: Tagg girds itself